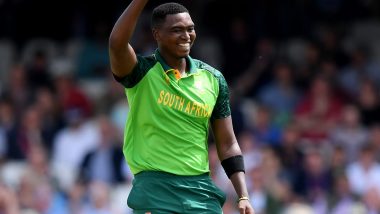 Lungi Ngidi breathed fire during the 2nd South Africa vs Australia ODI at the Mangaung Oval in Bloemfontein and registered his maiden five-wicket haul in ODIs. The right-arm pacer scalped six wickets in total and played a crucial role in guiding his side to a six-wicket triumph and a series victory too. In the process, Ngidi also became the fastest South African bowlers to reach the landmark of the 50 ODI wickets, achieving the feat in his 26th game. He went past former South African pacer Lonwabo Tsotsobe, who took 27 matches to claim his 50th wicket. South Africa Vs Australia, 2nd ODI Match Full Scorecard.

The speedster went to the prestigious landmark by scalping his third wicket of the game, dismissing Marnus Labuschagne for a golden duck. Moreover, he only scalped the first five Australian wickets and left everyone in awe. Well, the pacer has certainly made a great start to his career and will be expected to guide South Africa to great heights again.

Making his ODI debut in February 2018 against India, Ngidi didn’t take long in grabbing the attention of the cricket world. The right-arm fast bowler possesses the ability to move the ball in the air and that too at a brisk pace. Adding on that, Ngidi also has a brilliant record in the death overs as he has a bucket of variations to succeed in the end overs and his toe-crushing yorker is second to none. Well, all of his abilities were seen in the second ODI against Australia where he dismissed the likes of David Warner and Steve Smith in order to guide his side over the line.

Earlier in the game, Aaron Finch won the toss and elected to bat first. Despite Ngidi fantastic show, the Men in Yellow piled up 271 runs in the first innings, courtesy, half-centuries from skipper Aaron Finch and D’Arcy Short. However, the total didn’t prove to be enough as opener Janneman Malan scored a century in the second innings and a fifty from Heinrich Klaasen guided South Africa to the win. The third encounter of the series, which will be a dead rubber, will be played on March 7 at the Senwes Park in Potchefstroom.

(The above story first appeared on LatestLY on Mar 05, 2020 09:18 AM IST. For more news and updates on politics, world, sports, entertainment and lifestyle, log on to our website latestly.com).