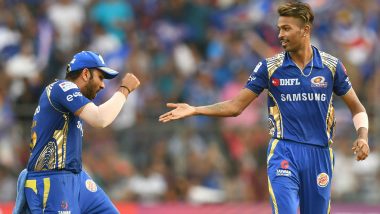 Mumbai, June 6: All-rounder Hardik Pandya was all praise for his Mumbai Indians captain and India teammate Rohit Sharma. Pandya has played for MI under Rohit's captaincy since 2015 and has won the Indian Premier League (IPL) three times. "I have always enjoyed playing with Rohit and he has been a great captain. We don't have much conversation about the game but I have had my best years playing under him," Pandya is quoted as saying by the franchise.

Pandya also said that star fast bowler Jasprit Bumrah is a "different character." "He's calm and knowledgeable. He's someone who I enjoy being with. We have got success together and have genuinely shared that success," he said. Hardik Pandya Picks His All Time IPL XI, Not Rohit Sharma! MS Dhoni Named As Captain.

Both Pandya and Bumrah came into national reckoning initially due to their performances for MI. They have since gone on to play for India in all formats of the game with Bumrah being widely regarded as one of the best fast bowlers in the world at present.

Pandya on the other hand missed a better part of 2019 due to injury. He was initially expected to take part in India's tour of New Zealand earlier in the year before he headed to the NCA for further rehab. He was then named in the squad for the ODI series against South Africa, but the first game got washed off and the series then got called off due to coronavirus pandemic.

(The above story first appeared on LatestLY on Jun 06, 2020 09:27 PM IST. For more news and updates on politics, world, sports, entertainment and lifestyle, log on to our website latestly.com).