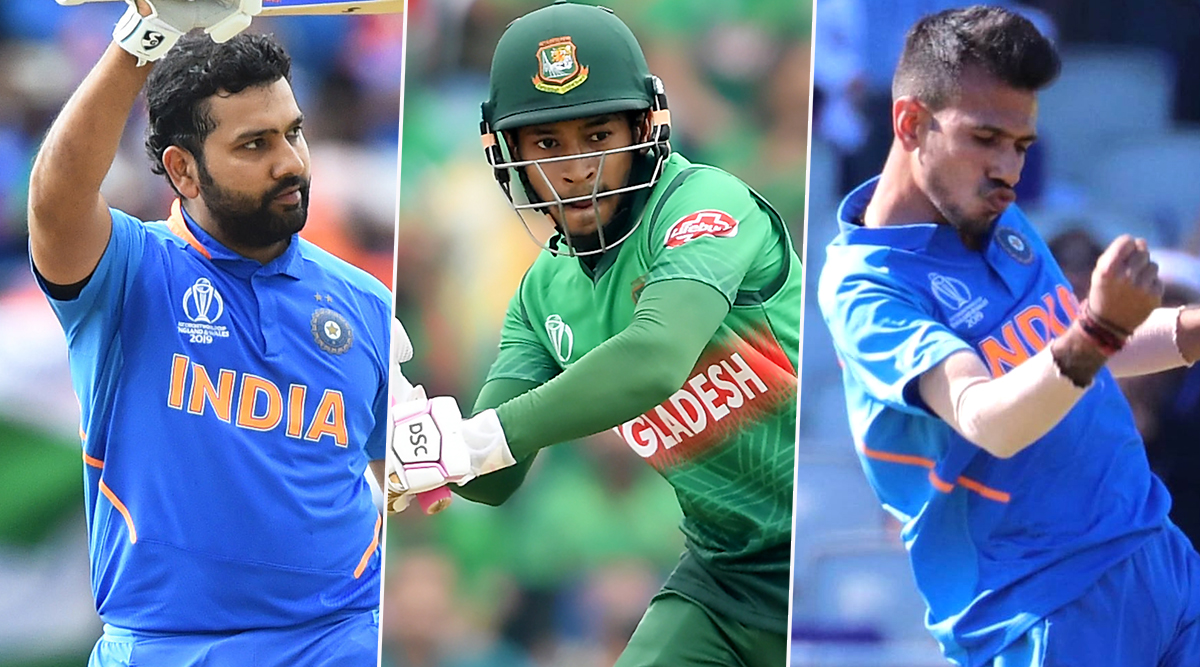 India will lock horns with Bangladesh in the 3rd T20I match of the three-matches series. The game will be held on Nov 10, 2019, at Vidarbha Cricket Association Stadium in Nagpur. The series is currently balanced at 1-1 as the upcoming game will be a decider. The home team won the previous game by 8 wickets as they chased down the total of 153 in 15.4 overs. The visitor registered their first victory over India in the opening game of the series. Meanwhile, let us have a look at key players to watch out for in IND vs BAN 3rd T20I like Rohit Sharma, Mushfiqur Rahim, Yuzvendra Chahal and others. India Vs Bangladesh, Cricket Score 3rd T20I Match.

The previous T20I played at Saurashtra Cricket Association Stadium in Rajkot saw India winning the toss and elected to bowl first on a flat batting track. Bangladesh did not utilise the pitch well and inspite of a good start they managed to post a target of 154 runs which was indeed at least 30 runs short of what was required on that track. In reply, India got off to a flying start as skipper Rohit Sharma made 85 runs from 43 balls. Now let us have a brief overview of players who can create a major impact in the upcoming IND vs BAN 3rd T20I match. India vs Bangladesh 3rd T20I 2019, Match Preview: Men in Blue Aim to Quash Visitor’s Hope of Series Victory in Nagpur.

Rohit Sharma played 100th T20I game of his career in the previous match. He broke the shackle of not being able to score high runs in T20I in the last game. His blistering knock of 85 runs from 43 balls helped India register a comfortable victory in the 2nd T20I match against Bangladesh. His inning included six boundaries and six maximums with a strike rate of 197.67. If Bangladesh wants to seal the series, then they will have to find a way to dismiss The Hitman early in the inning, just the way they did in the 1st T20I match. India vs Bangladesh Dream11 Team Prediction.

The Bangladeshi wicket-keeper batsman must have failed to perform in the previous game as he fell prey to Yuzvendra Chahal. However, he is the one responsible to take away the game from India in the 1st T20I where he scored an unbeaten 60 runs from 43 balls to help his team chase down the target of 149 runs.

Deepak Chahar has consistently performed well in T20I matches in recent times. His performance has been upto the mark this year. From six games this year, he has bagged eight wickets till now. Although he has bagged only two wickets so far in the series he has been quite economical in the last two games. He provides good support to the bowling unit.

The southpaw of Bangladesh Cricket Team has impressed with his performance in the on-going series as he reached into the thirties in his last two innings. Had he batted a bit longer in the previous T20I match, he could have helped his team post a competitive total. He fell prey to Chahal after scoring 30 runs from 20 balls.

The right-arm leg break spinner is just one wicket away to reach the milestone of 50 wickets in T20Is. Chahal is the bowler majorly responsible to control Bangladeshi batsmen run-scoring abilities. Not only he is economical, but also strike with wickets at crucial times. In the previous game, he had a figure of 2/28 in 4 overs which included important wickets of Mushfiqur Rahim and Soumya Sarkar.

India currently ranks at number five position in T20Is with 259 points, they will definitely want to move up the ranking by defeating Bangladesh in the upcoming game. Rohit Sharma is leading the Indian side in the absence of Virat Kohli. However, Kohli will resume captaincy in the Test Series against Bangladesh which will begin from Nov, 14 2019.