With South Africa winning the Test series, and India the ODI series, the winner of the T20 series will determine the real champion between both the sides! 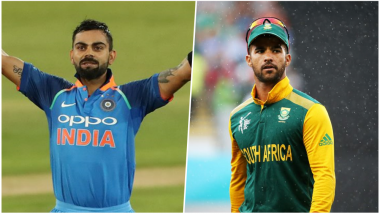 India will be playing against South Africa for the last time on this long enthralling tour on February 24. The third Twenty20 International (T20I) between India and South Africa will be played at the Newlands Cricket Ground, in Cape Town on Saturday. After a resurgent South African side beat India in the rain-affected T20I match, both the teams will be eyeing for a win in the series decider.

India trounced South Africa in the first T20I, winning the contest by 28 runs. India made their highest total (203/5), against Proteas, and it was Bhuvneshwar Kumar’s first five-wicket haul in T20, that saw India cruise to victory in the first match.

The second match of the three-match series saw Proteas riding home on the back of Heinrich Klaasen and JP Duminy’s half-centuries. Klaasen scored 69 runs off only 30 balls, hitting 7 sixes and 3 fours; whereas Duminy scored 64 runs off 40 balls, hitting 3 sixes and 4 fours.

India saw a formidable partnership being formed between Manish Pandey and MS Dhoni. Both players scored half-centuries as India had posted a competitive total of 188 runs. Shardul Thakur made his T20I debut, whereas Yuzvendra Chahal had an off day; he delivered India’s worst bowling performance in T20Is, as he leaked 64 runs.

After India’s 2-1 debacle in the Test series loss, and South Africa’s poor performance in the 5-1 ODI series loss, both, Men in Blue and Proteas will be looking forward to winning the T20 series at Capetown. If India manages to secure a victory, it will be for the first time that the team will win a rare double series on foreign soil, let alone in South Africa.

As India and South Africa clash on Saturday it will be interesting to see who comes out on the top. With South Africa winning the Test series, and India the ODI series, the winner of the T20 series will determine the real champion between both the sides. Who according to you will win the three-match T20 series?

(The above story first appeared on LatestLY on Feb 23, 2018 07:27 PM IST. For more news and updates on politics, world, sports, entertainment and lifestyle, log on to our website latestly.com).