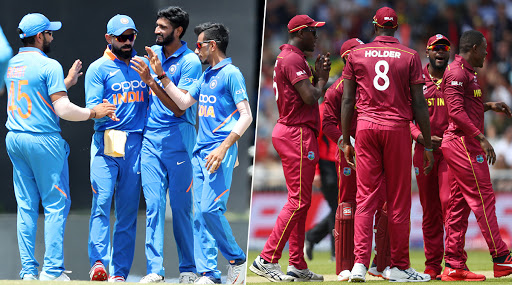 India and West Indies are set to face each other in the 2nd T20I 2019 at Thiruvananthapuram on December 8 (Sunday). IND vs WI, 2nd T20I match will be played at Greenfield International Stadium in Thiruvananthapuram. India won the first match after chasing their highest-ever total in Twenty cricket. India chased 208 runs with 6 wickets in hand in 1st T20I 2019 with Virat Kohli’s flamboyant unbeaten 94*. India lead the series 1-0 and need one more victory to win the T20I series. As IND vs WI 2nd T20I 2019 takes a countdown, we will look at India vs West Indies head-to-head record and match results of last five IND VS WI T20I encounters. India Vs West Indies, Cricket Score 2nd T20I Match.

India and West Indies have played a total of 15 T20I matches so far, in which India won 9 while West Indies won 5. One game ended with no result due to rain. India have dominated West Indies in overall records but the Caribbean team have given a severe blow to India in T20Is many times. In the IND vs WI 1st T20I 2019, multiple West Indies’ batsmen like Kieron Pollard, Evin Lewis and Jason Holder among others gave a tough fight to India. Below are the previous five head-to-head records of IND vs WI matches in T20I cricket. India vs West Indies Dream11 Team Prediction: Tips to Pick Best Playing XI With All-Rounders, Batsmen, Bowlers & Wicket-Keepers for IND vs WI 2nd T20I Match 2019.

This is just the previous match in which Virat Kohli hit an unbeaten 94-run-knock to win the match for his team by 6 wickets. India chased their highest-ever T20I score in the match, which was played in Hyderabad.

After opting to bowl first, India managed to restrict West Indies to a low total of 146 runs in 20 overs. Deepak Chahar took three wickets for just four runs in his spell. India started poorly after Shikhar Dhawan and KL Rahul lost their wickets cheaply. However, Kohli and Rishabh Pant hit 100 runs partnership to take the game away from the West Indies.

After electing to bat first, Shikhar Dhawan and Rohit Sharma put India in a great position with a 50-run stand. After Dhawan’s dismissal, Rohit smashed 67 off 51 deliveries and helped India to reach 167 off 20 overs. After 15.3 overs, rains caused the West Indies innings to be abandoned. West Indies could not reach the DLS target of 221 runs. The Caribbean side only managed 98 runs and lost the match.

The first match of the series was a low-scoring matter West Indies were bowled out for 95 runs after being asked to bat first. India were three down for 32 runs. But Virat Kohli and Manish Pandey managed the batting well. Washington Sundar and Ravindra Jadeja got the winning runs for India.

After electing to bat first, the visitors West Indies were given a stable start by openers Nicholas Pooran’s half-century. Chasing this target, the Men in Blue lost Rohit Sharma and KL Rahul very cheaply but great innings of 92 runs from Shikhar Dhawan and a half-century from Rishabh Pant brought victory in India’s favour.