IPL 2020 WAGs: Will Anushka Sharma, Sakshi Dhoni And Others Be Allowed to Attend Indian Premier League 13 Matches in UAE? 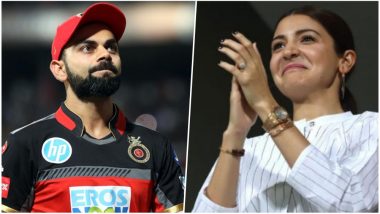 IPL 2020 is all set to be held in the United Arab Emirates (UAE) later this year as confirmed by Chairman Brijesh Patel. The cash-rich league will be played from September 19, 2020, to November 8, 2020. Ahead of the tournament’s start, BCCI has prepared the Standard Operating Procedure (SOP) as the governing body looks to host the competition with highest safety precautions amid the coronavirus pandemic. IPL 2020 Update: BCCI Share Detailed Plan for Indian Premier League 13.

As per the SOP, players and franchise staff members have to remain in a bio-secure bubble in order to maintain the highest level of safety due to the current situation around the world. Even match officials, umpires and even team bus drivers are not allowed to break the bio-secure protocols. Amidst all this, the question emerges of whether the player’s families will be allowed to travel with them for the tournament. IPL 2020 Host is UAE: List of Countries Who Have Hosted Indian Premier League Editions Over The Years.

Players have gotten used to their wives, girlfriends and families coming and supporting them during IPL matches over the years. The sight of Anushka Sharma, Sakshi Dhoni and Ritika Sajdeh sitting in stands and chanting for their spouses has become a regular prospect.

This issue has been left by BCCI for the respective franchises to decide. ‘The BCCI will not decide whether WAGs and family members can travel with the players, we have left it to the franchises. But we have put out a protocol in which everyone, even team bus drivers, can’t leave the bio-bubble,’ a BCCI official was quoted saying by The Indian Express.

Along with this, to maintain the highest level of safety, players will have to undergo four round of coronavirus testing. Two tests will be carried out in India before departure while the rest during the quarantine period in UAE. If families are allowed to travel, they are expected to go through a similar kind of procedure.

Due to the coronavirus pandemic, Fans will not be permitted inside the stadiums in order to reduce gathering of people in large numbers. The matches will be played behind closed doors in the stadiums at Abu Dhabi, Dubai and Sharjah.

(The above story first appeared on LatestLY on Jul 30, 2020 10:43 AM IST. For more news and updates on politics, world, sports, entertainment and lifestyle, log on to our website latestly.com).