The latest defeat, a seven-wicket loss to Kolkata Knight Riders on Thursday, saw MI slump to sixth place on the points table with eight points. KKR notched up the required runs with nearly five overs to spare, with Rahul Chahar (34 runs in 3 overs) and Jasprit Bumrah (43 in 4 overs) bearing the brunt of the batsmen, though the latter took three wickets. 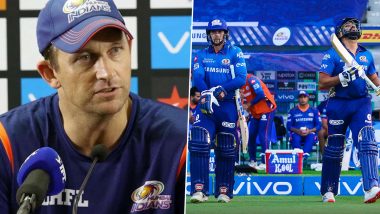 Dubai, Sep 24: Mumbai Indians' bowling coach Shane Bond doesn't feel conceding runs in the middle and death overs is becoming a problem for the five-time champion Indian Premier League side as it slips on the points table after losing two consecutive matches here.

The latest defeat, a seven-wicket loss to Kolkata Knight Riders on Thursday, saw MI slump to sixth place on the points table with eight points. KKR notched up the required runs with nearly five overs to spare, with Rahul Chahar (34 runs in 3 overs) and Jasprit Bumrah (43 in 4 overs) bearing the brunt of the batsmen, though the latter took three wickets. IPL 2021 Points Table Updated.

"I don't think so (team conceded runs in middle and death overs) because if you look through the tournament our bowling groups did a pretty good job. The wickets were tough when we played in Chennai where we scored 150 and defended a couple of times in the first couple of games that we were out of," said Bond, the former New Zealand tearaway bowler.

"First game (against CSK) we had put up a very good bowling performance but a couple of big overs cost us. We had kept them down to the score that we felt was below par but couldn't chase it down. Today look, they played really well you have to give them that credit. They came out, were positive, put us under pressure. They bowled in some good areas and we understand they were good enough. They just kept that pressure on us and we just were not good enough to respond."

Bond said that no team can be so consistent as Mumbai Indians if their bowling department is weak. "We have won four of the last six tournaments on the back of some great bowling performances. We will improve, I'm sure, in the next coming innings, we've got too good of bowlers to not to, but we just have to respond now under pressure. So, I am not concerned because we were just outplayed today but we expect to be a lot better in the next game." IPL 2021 Schedule For Free PDF Download Online: Time Table With Date & Match Time In IST, Venue Details, Fixtures For UAE Leg Of Indian Premier League 14.

Bond replied in the negative when asked if Rohit Sharma's wicket made MI lose control of the game. Sharma was cruising along nicely on 33 when West Indian bowler Sunil Narine got the skipper yet again -- ninth time in T20s to be precise -- as Shubman Gill caught him on the edge of the long-on boundary. That was the first MI wicket to fall with the score on 78.

"I don't think so. I think we were in a position to accelerate the game and we had made the right decision. The first 6 overs were exceptional for us with 56-0. Probably the next two overs cost us a little bit. I think we got seven runs in two overs which sort of sucked the momentum out from our innings. With ten wickets in our hand, you would expect to take a little bit of risk, but unfortunately, he got out.  IPL 2021 Orange Cap Holder List .

"We relied on needing someone else to come up and pick that momentum but we haven't been able to do that in the past two games - someone coming in, imposing themselves and getting a kick on. That was the case again today. Polly had a little bit of a cameo but it is a lot to ask consistently of someone coming up and hitting 13 or 14 runs in an over.  IPL 2021 Purple Cap Holder List.

"I felt that on that wicket today, it was 175-180 wicket but we were well short of the score and KKR bowled beautifully in discipline and really put us under pressure with the bat and dominated the game and they deserved to win."

(The above story first appeared on LatestLY on Sep 24, 2021 11:59 AM IST. For more news and updates on politics, world, sports, entertainment and lifestyle, log on to our website latestly.com).