Two bombs exploded inside a packed ground at the M Chinnaswamy Stadium on April 17, 2010. According to the final official report, fifteen people were injured. A third bomb was subsequently diffused. 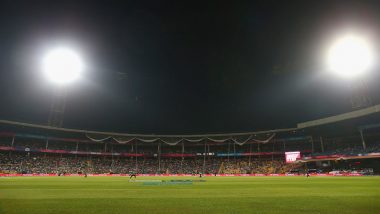 Two bombs exploded inside a packed ground at the M Chinnaswamy Stadium on 17 April 2010. Royal Challengers Bangalore (RCB) were hosting Mumbai Indians on April 17, 2010 that day. According to the final official report, fifteen people – including five security personnel – were injured. Some parts of an outer portion of a wall were blown away. A third bomb was subsequently diffused. IPL Controversies- Part 7: Indi Commandos to Kochi Tuskers Kerala.

The explosions took place the day after the US State Department had issued a travel alert that ran ‘The U.S. government continues to receive information that terrorist groups may be planning attacks in India.’

However, both semi-finals were moved out of Chinnaswamy to the DY Patil Stadium in Navi Mumbai. Chinnaswamy had been awarded the two matches after Royal Challengers had finished runners-up in 2009. IPL Controversies- Part 6: 'Fake IPL Player' Incident in 2009.

Ironically, Mumbai met Bangalore in one of the two semi-finals. They won again, this time by 35 runs. Once again Pollard made crucial contributions (32 not out in 13 balls, 4-0-17-3). By the end of the year, the Bangalore Police made at least two major arrests.

(The above story first appeared on LatestLY on Apr 08, 2021 05:17 PM IST. For more news and updates on politics, world, sports, entertainment and lifestyle, log on to our website latestly.com).