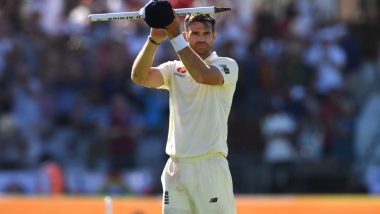 Veteran England pacer James Anderson is set to face media on Monday (August 10, 2020) with speculations going around that the legendary bowler might hang up his boots. Anderson, 38, hasn’t been able to make a mark since the resumption of cricket post the COVID-19 break and as per the reports of Dailymail.co.uk, the right-arm pacer might take a call on his future in the press conference. Speculations are that Anderson, who is just 10 scalps from 600 Test wickets, will also get rested for the second Test against Pakistan which will get underway on August 13. Joe Root Says Maximising Careers of Stuart Broad and James Anderson Really Important.

Post the return of cricket, Anderson has picked just six wickets from three matches. Also, with the recent performances of Chris Woakes and Jofra Archer, his mediocre performances will get questioned by fans. Well, Anderson will also be aware of the fact and it will be interesting to see what his upcoming press conference will result into.

As of now, England are playing Pakistan in a three-match Test series which the first match gone to the Three Lions. The second match of the series will get underway on August 13 at the Old Trafford in Manchester. Joe Root and Co, who will go 1-0 up in the series, have a great chance to seal the series. On the other hand, the second game will be a do-or-die encounter for the visitors and they’ll eye to make a comeback.

(The above story first appeared on LatestLY on Aug 10, 2020 01:42 PM IST. For more news and updates on politics, world, sports, entertainment and lifestyle, log on to our website latestly.com).