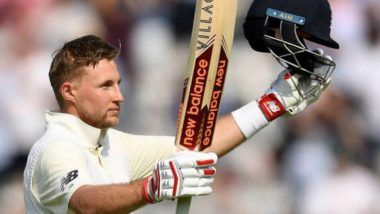 Manchester, July 16: England Test captain Joe Root stated rotation might be the key going forward as far as veteran fast bowlers Stuart Broad and James Anderson are concerned. According to Root, this will help in maximising their careers as the stalwarts enter the final phase of their respective illustrious stints on the international arena. Broad was left out of the first #raisethebat Test against West Indies at Ageas Bowl in Southampton, which the hosts lost by four wickets to go 0-1 down in the three-match series. Anderson is now sitting on the bench for the second Test at Old Trafford in Manchester.

"With Stuart and Jimmy, trying to maximise their careers is really important to make sure they are playing for as long as possible," Root told reporters as per the Guardian. "If that has to be slightly different to how it has been over the last few years, then we might have to think outside the box and not play them in every game or not play them together all the time. England vs West Indies 2nd Test 2020: Joe Root, Jermaine Blackwood and Other Key Players to Watch Out for in Manchester.

"That is not to say it won't happen again. They are two world-class performers and we are very, very lucky to have them. I think to wish that away early or to push them to one side would be stupid, I really do. "[But] I think we've got to deal with it well and be smart with it and we will find opportunities to play other guys, too," Root added.

The workload management of fast bowlers also makes sense considering the hectic couple of months for 'The Three Lions'. Following the conclusion of the West Indies series, they are scheduled to play three Tests and as many T20Is against Pakistan starting August 5.

(The above story first appeared on LatestLY on Jul 16, 2020 06:20 PM IST. For more news and updates on politics, world, sports, entertainment and lifestyle, log on to our website latestly.com).