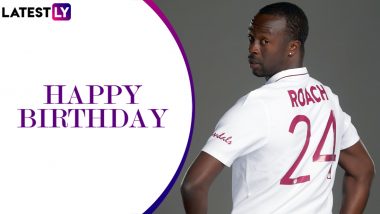 Kemar Roach is regarded as one of the best bowlers in the contemporary cricket. The pacer is the leader of West Indies' bowling attack and is known for his fierce pace. The right-arm fast bowler often sets the speed gun on fire. Roach was born on June 30, 1988, in St. Lucy, Barbados. The Windies fast-bowler turns a year older today. As Roach celebrates his 32nd birthday, we take a look at some of his best bowling performances in Tests and One-Day Internationals (ODIs). West Indies Cricket Team to Wear Black Live Matter Logo on Shirts During 2020 England Test Series.

Roach made his debut in 2008 for West Indies in a T20I match. The pacer, however, has played just 11 T20Is since then and is more of a Test specialist. In 2008, he made his ODI debut and in 2009, the fast-bowler was handed Test debut against Bangladesh. Meanwhile, check out Roach's best bowling figures below (in no particular order):

5/8 vs Bangladesh, 2018, Test: West Indies registered a victory by an innings, and 219 runs against Bangladesh at the Sir Vivian Richards Stadium, North Sound, Antigua. In their first innings, Bangladesh were bowled out for just 43 runs with Roach picking five wickets and gong away just eight runs.

5/41 vs Australia, 2012, Test: In a drawn game at Queen's Park Oval, Port of Spain, Trinidad, Roach picked two five-wicket hauls. After registering 5/105 in the first innings, the pacer ended with figures of 5/41 in Australia's second innings.

6/27 vs Netherlands, 2011, ODI: In a World Cup match at Delhi, Roach steamed past the Netherlands and scalped 6/27 which included a hat-trick towards the end of the match as well.

6/48 vs Bangladesh, 2009, Test: Playing in his just the second Test, Roach ran through Bangladesh batting to register figures of 6/48. However, West Indies lost the Test match by four wickets. Interestingly, 6/48 continues to be Roach's best bowling figures in Tests.

In 56 Tests, Roach has picked 193 wickets. In 92 ODIs and 11 T20Is, the pacer has 124 and ten wickets respectively against his name. The 32-year-old will be in action against England in the upcoming three-match Test series, starting July 08.

(The above story first appeared on LatestLY on Jun 30, 2020 09:00 AM IST. For more news and updates on politics, world, sports, entertainment and lifestyle, log on to our website latestly.com).