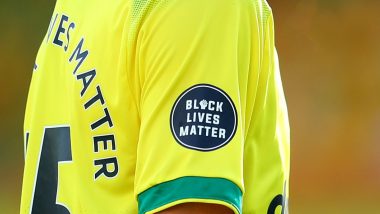 West Indies cricketers will wear Black Lives Matter logo on their shirts during the England Test series, starting July 8, 2020. Captain Jason Holder, who had earlier indicated that the players might take a knee before the start of the match to show their support towards the movement, suggested that they also wear a Black Lives Matter emblem on the collars of their shirts. The logo is already being worn by the Premier League clubs since football resumed in England earlier this month and could see West Indies become the first cricket team to sport it. West Indies Test Captain Jason Holder Feels Racism Should Be Treated Like Match-Fixing & Doping.

"We believe we have a duty to show solidarity and also to help raise awareness,” Holder said in pre-tour conference suggesting that the West Indies, in some way, will show their support towards the Black Lives Matter movement. According to a report from ESPNcricinfo, Cricket West Indies had contacted Alisha Hosannah, who designed the BLM logo used by Premier League clubs. England vs West Indies Test Series 2020, Key Players: Ben Stokes, Alzarri Joseph, Jofra Archer and Other Cricketers to Watch Out for.

Alisha Hosannah, who is Watford captain Troy Deeney’s partner will make a similar design for the West Indies national team after approval from the International Cricket Council (ICC). "This is a pivotal moment in history for sports, for the game of cricket and for the West Indies cricket team," Holder was quoted as saying by ESPNcricinfo. "We have come to England to retain the Wisden Trophy but we are very conscious of happenings around the world and the fight for justice and equality.

"As a group of young men, we know of the rich and diverse history of West Indies cricket and we know we are guardians of the great game for generation to come. We did not take our decision lightly. We know what it is for people to make judgments because of the colour of our skin, so we know what it feels like, this goes beyond the boundary,” he added.

“There must be equality and there must be unity. Until we get that as people, we cannot stop. We have to find some way to have equal rights and people must not be viewed differently because of the colour of their skin or ethnic background."

Premier League clubs have been sporting the  BLM emblem on the sleeve of their shirts and have also written 'Black Live Matter' in bold on the back of their jerseys instead of their names.

Meanwhile, West Indies face England in a three-match Test series with the opening Test to be played at the Ageas Bowl from July 8. The Caribbean side have already reached England and will be starting their campaign with a warm-up game at Old Trafford from Monday.

(The above story first appeared on LatestLY on Jun 29, 2020 08:51 AM IST. For more news and updates on politics, world, sports, entertainment and lifestyle, log on to our website latestly.com).