In its 15 years of existence, the Indian Premier League (IPL) has witnessed many a player coming from wilderness to make a name for themselves. 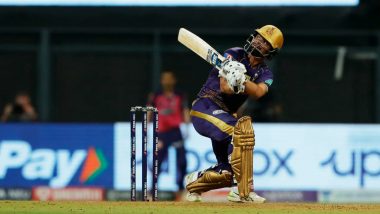 Mumbai, May 3: In its 15 years of existence, the Indian Premier League (IPL) has witnessed many a player coming from wilderness to make a name for themselves. Kolkata Knight Riders' Rinku Singh became the latest entrant in this list after he scored a brilliant unbeaten 42 off 23 balls, hitting six fours and a six to help KKR win by seven wickets. Rinku raised 66 runs for the unfinished fourth-wicket partnership with Nitish Rana (48 off 37, 4 x 3, 6 x 2) as Kolkata Knight Riders reached 158/3 in 19.1 overs to overhaul Rajasthan Royals' score of 152/5 in 20 overs. KKR vs RR, IPL 2022: To Bounce Back After Five Defeats Shows Character, Says KKR Coach Brendon McCullum.

For his superb unbeaten 42 off 23 deliveries and two catches, Rinku was adjudged the 'Player of the Match', his first award in the IPL, bringing to life a remarkable journey for the 24-year-old from Aligarh in Uttar Pradesh that involved five-years of wait in IPL wilderness hoping for an opportunity to show his worth after years of toil at the domestic level playing for Uttar Pradesh. Kolkata Knight Riders head coach Brendon McCullum on Monday alluded to his remarkable journey from the town of Aligarh, known more for its locks than cricketers, to becoming an IPL player and winning his maiden 'Player of the Match' award.

"He's an amazing story. He's been around the franchise now for a long period of time. Before the first game that he played, I was lucky enough to spend a little bit of time with him. He knew for his own self-worth and his own career that he needed to make a statement in this competition. He was able to do it in the first game. "He's such a great team man, a wonderful human being and the real vibe and culture of the group is set by Rinku. Some players just deserve to have things go their way and Rinku is one of them," said McCullum after Rinku guided the team to victory against Rajasthan Royals.

Indeed, Rinku's is a remarkable story that has a huge dose of hardships, rejection, dejection and heart-break and eventually success. In between, his story also involves injury scares and a three-month suspension by the BCCI in 2019 for playing in a T20 tournament in Abu Dhabi. Rinku survived all those setbacks, scored a pile of runs for Uttar Pradesh at the domestic level and slowly and steadily achieved success. In IPL 2022, Rinku has so far scores of 35 (28 balls) against Gujarat Titans, 23 (16) against Delhi Capitals and 42 not out (23 balls) against Rajasthan Royals on Monday. With three good knocks, Rinku has at least cemented his place in the KKR Playing XI for the next few matches and if he continues to shine, he may even draw the attention of other franchises, which could result in more game time.

Born on October 12, 1997 in Aligarh, Rinku was picked by Kings XI Punjab (now Punjab Kings) in 2017 but failed to get a chance. He was picked by Kolkata Knight Riders in the 2018 auction for Rs 80 lakh. He remained with KKR till 2021 when he was ruled out of IPL due to a knee injury and was later replaced by Gurkeerat Singh Mann. Though he did not get a chance to play, his superb work ethics, friendly nature and desire to contribute to the team in any manner endeared him to the franchise and KKR again bought him in February this year for IPL 2022. And this season, he got a chance to play as KKR went about cutting and chopping the squad in search for the right combination as they slumped to five successive defeats. KKR vs RR, IPL 2022: Nitish Rana, Shreyas Iyer, Rinku Singh Knocks and Clinical Bowling Help Kolkata Subdue Rajasthan for 7-Wicket Win.

The left-handed batter and right-arm off-break bowler, Rinku, who comes from a lower middle-class family as his father works for a domestic gas agency delivering gas cylinders, has played age-group cricket for Uttar Pradesh and had to save money from his daily allowances to help his father pay off a loan of Rs five lakh. It was such a tough period for Rinku that at one time he contemplated quitting cricket and taking up work as a domestic help, sweeping and mopping floors, to contribute to his family's income. He eventually decided to persevere with his cricket and that eventually paid off, as he made it to the UP Ranji Trophy team, the higher match-fee now helping him take better care of his family.

He was big success for Uttar Pradesh in first-class cricket, amassing 953 runs in 10 matches in the 2018/19 season. So, far he has scored 2307 runs in 46 innings in first-class cricket, hitting five hundreds and 16 fifties. In 41 List A matches, Rinku has compiled 1,414 runs (one century and 12 fifties) and in T20 cricket, he has scored 1,081 runs in 64 matches at a strike rate of 138.5 and average of 24.56. Though Rinku has finally achieved some success that he is getting recognised by people, he is quintessentially a small-town boy, taking pride in putting his hometown's name on the IPL map. "I am the first to play IPL from Aligarh, though many have played Ranji Trophy. There is pressure in the IPL that is not there in first-class cricket. It's been five years, I haven't been getting chances regularly. Feels good to contribute now," he added on Monday. Now that he has made the breakthrough, Rinku Singh will be hoping to get many more chances in IPL so that he can make the most of them to fulfil his childhood dream of one day representing the country.

(The above story first appeared on LatestLY on May 03, 2022 10:40 AM IST. For more news and updates on politics, world, sports, entertainment and lifestyle, log on to our website latestly.com).