Samuels was upset with Stokes or referring to him in a joke regarding COVID-19 quarantine where Stokes had mentioned he won't wish even on his enemy Samuels. The former West Indies batsman replied to it with a series of foul-mouthed words and expletive-laden posts on his Instagram handle and also dragged Stokes' wife in the argument. 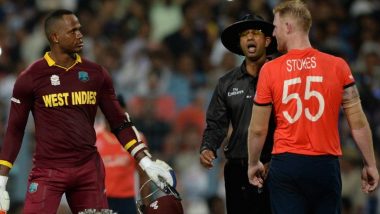 Rajasthan Royals all-rounder Ben Stokes’ recent joke about not wishing a 14-day quarantine on his ‘worst enemy’ Marlon Samuels didn’t go down well with the former West Indies cricketer, who has hit back at the England star. Stokes and Samuels’ rivalry dates back to 2015 when the West Indies batsman had given Stokes a send-off and mocked him with a salute after Stokes was dismissed. Things then turned ugly at the 2016 ICC World T20 final when Stokes allegedly said something to Samuels, which angered the Windies batsman. The rivalry seems to have resumed once again with Samuels attacking Stokes with foul-mouthed word for his comments. IPL 2020: Rajasthan Royals All-Rounder Ben Stokes Dedicates His Hundred to Family, Says ‘Hope This Gives Family Some Happiness in Difficult Time’.

Samuels was upset with Stokes after he had referred to the former in a joke in a podcast with Test Match Special (TMS). The Rajasthan Royals and England all-rounder was talking to TMS in their IPL podcast when he was asked about the 14-day quarantine he had to undertake while visiting his parents in New Zealand and also after reaching Dubai for IPL 2020. IPL 2020: Rajasthan Royals All-Rounder Ben Stokes Made the Chase Look So Easy, Says Sachin Tendulkar.

Stokes had to quarantine for 14-days in a hotel in Auckland after he left the England squad mid-way through the Pakistan Tests series to be with his parents in New Zealand after reports had emerged his father was unwell. Then last month when Stokes travelled to UAE to join the Rajasthan Royals squad for Indian Premier League (IPL) season 13 he had to stay quarantined again before he could join his teammates.

The 29-year-old was asked about the difficulties and what he was going through during the quarantine period. “You get off the plane, get your bag, walk out and get told what hotel to go to,” he said in the podcast. “There’s no choice, it’s pot luck whether you get a good hotel or not. The government have chosen certain hotels to be the quarantine hotels.

“I posted a few Instagram stories and some of the England boys were messaging me asking what it’s like and I was saying it wasn’t the most enjoyable thing you ever have to do, I wouldn’t wish it on my worst enemy,” he added. “I text my brother saying the same thing, and my brother asked: ‘You wouldn’t even do that to Marlon Samuels?’ I said ‘no, it’s that bad’ – that’s how tough it was,” Stokes joked.

While Stokes’ comment was light-hearted, it didn’t really go down well with Samuels who slammed the RR and England all-rounder for his comments. In a series of posts on his Instagram stories, Samuels launched a scathing attack on Stokes. The former West Indies cricketer used expletive words and also dragged Stokes’ wife in the argument. 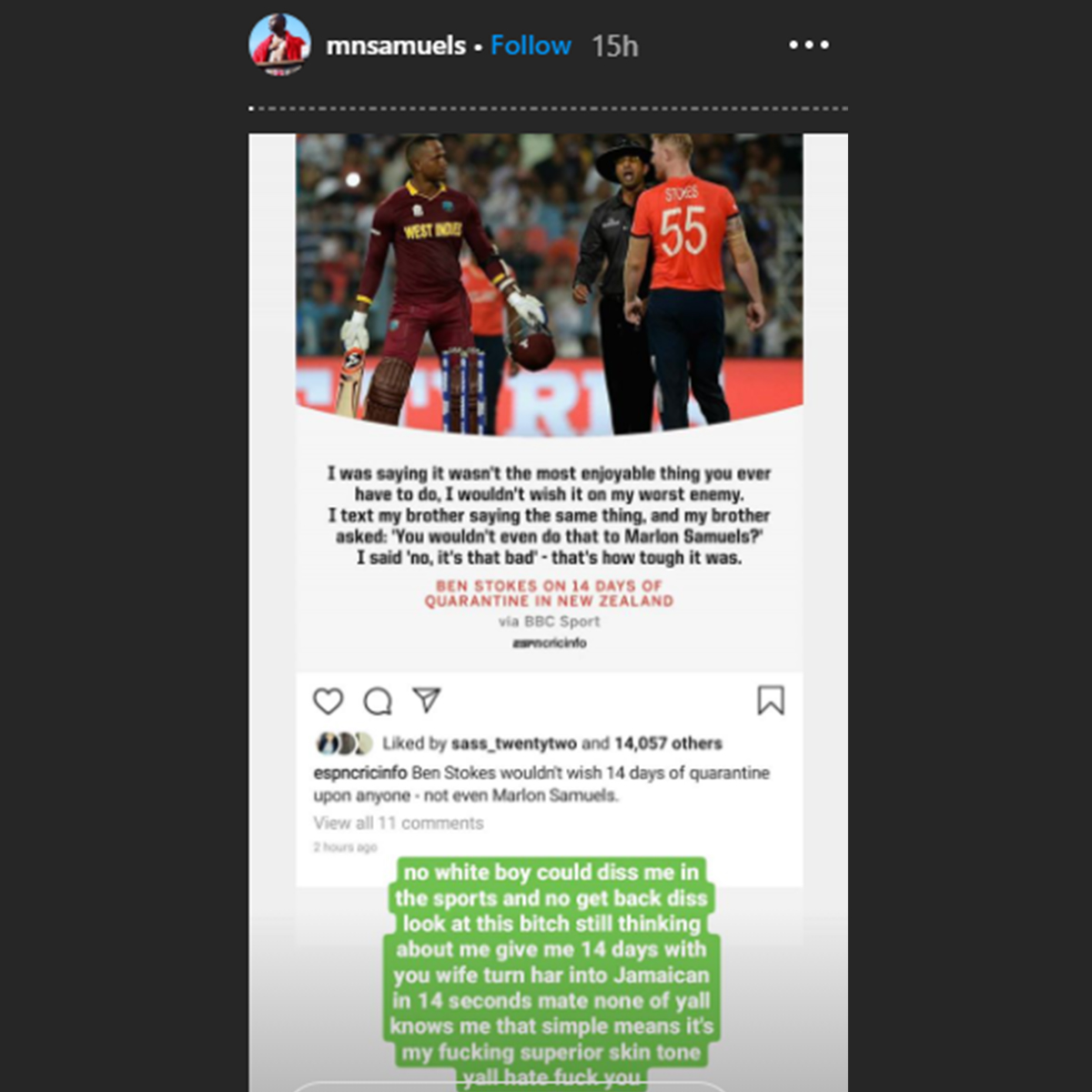 “No white boy could diss me in the sports and no get back diss look at this b*tch still thinking about me give me 14 days with you wife turn har into Jamaican in 14 seconds mate none of yall knows me that simple means it’s my f***ing superior skin tone,” Samuels wrote in his Instagram story attaching a quote of Stokes’ comment.

#sextillion7thpower yes I am the bad guy so what!

But not stopping here, he also targeted former Australian all-rounder and Rajasthan Royals’ mentor Shane Warne in his vile rant. “ICC cricketing world ben b*tch stokes Shane b*tch warn and a few b*tch west Indians cricketers who sell out sextillion7thpower Ps nothing to f*ck with my army bigger and we richer,” he further wrote.

Stokes, meanwhile, was in great touch and smashed a match-winning century to lead Rajasthan Royals to a magnificent win over defending IPL champions Mumbai Indians. Stokes remained not-out on 107 from 60 deliveries as RR chased down 196 in 18.2 overs to keep themselves alive in the playoffs race. His match-winning knock was studded with 14 boundaries and three maximums and Stokes was also involved in an unbeaten 152-run partnership with Sanju Samson (54) as the pair guided Royals to a sensational win.

(The above story first appeared on LatestLY on Oct 27, 2020 11:59 AM IST. For more news and updates on politics, world, sports, entertainment and lifestyle, log on to our website latestly.com).