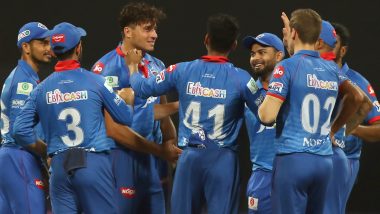 The Dream11 Indian Premier League (IPL) 2020 final will see Mumbai Indians going head to head with Delhi Capitals at the Dubai International Cricket Stadium on November 10 (Tuesday). Mumbai Indians will indeed take the field as favourites for not one but multiple reasons. Be it piling a mountain of runs or taking opposition batting line-up by storm; they have ticked all the boxes this season. Also, this will be there the sixth appearance in IPL finals while Delhi Capitals have qualified for the summit clash for the very first time. All these factors back Rohit Sharma’s men to cross the line and become champions for the fifth time. However, ruling Delhi Capitals out of the contest will not wise. If you disagree, check out these three reasons why Delhi Capitals will defeat Mumbai Indians to lift their maiden IPL title. MI vs DC IPL 2020 Final: Hardik Pandya, Marcus Stoinis and Other Key Players To Watch Out.

1. The Roar of ‘Gabbar’ Shikhar Dhawan

Fans must be aware of Shikhar Dhawan’s tendency of delivering when stakes are the highest. That’s the reason why he was India’s most successful batsmen in Champions Trophy 2013, 2017 and 2015 World Cup. Although one can’t give an exact reason behind the southpaw’s success in high-profile games, we believe that his carefree attitude helps him to deliver.  The left-handed batsman never really looked in any pressure regardless of his form or situation of the game, and a team such sort of player to win big games. Here’s How Delhi Capitals Made It to Summit Clash.

Also, this might be DC’s first IPL appearance, Dhawan has played as many as three IPL finals before (2010, 2016, 2018) and is well aware of the conditions. Adding onto that, the southpaw has been truly magnificent in the tournament. He is currently the second-highest run-scorer with 603 runs from 16 games and needs 68 more runs to go past Kings XI Punjab captain KL Rahul’s tally of 670 runs.

A good all-rounder can do wonders for any side in T20s, and Marcus Stoinis proved it time and again. The Australian star has been at the peak of his prowess this season and DC will be counting on him to deliver in the ultimate game. He has been striking the ball tremendously this season and his strike rate of approaching 150 justifies the fact. Stoinis, in fact, also scored a brilliant half-century against MI in Qualifier 1 where most of the DC batsmen failed to get going and now that he’s playing in his favourable position  - opening – fans can place their bet on him. Along with his batting prowess, his gentle pace bowling has also proven to be a sweet poison for the opposition batsmen. MI vs DC IPL 2020 Final: Shikhar Dhawan vs Jasprit Bumrah & Other Exciting Mini Battles.

The South African speedsters have set the stage on fire this season. Rabada has lived up to expectations and is the front runner to win the purple cap this season. DC skipper Iyer has passed the ball to Rabada every time he needed a wicket, and the Proteas star delivered more often than not.

While Rabada already had the reputation of being a World-class fast bowler, it was his partner-in-crime Anrich Nortje who caught off guard. He had by far been the fastest bowler this season and is well able to torment the likes of Hardik Pandya and Kieron Pollard. Despite being early in career, his shoulders haven’t gone after a dismal spell which showcases his character. Hence, the DC team management must be backing him to bowl another lethal spell.

Although these reasons suggest that DC can upset the defending champions, Shreyas Iyer’s men can afford to put a foot wrong. They have been defeated thrice by MI this season and must take the field with a solid game plan. Regardless of the result of the game, fans can expect a close contest.

(The above story first appeared on LatestLY on Nov 10, 2020 05:02 PM IST. For more news and updates on politics, world, sports, entertainment and lifestyle, log on to our website latestly.com).