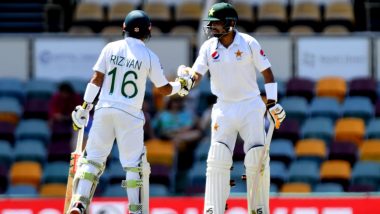 Karachi, January 24: Pakistan on Sunday announced a 17-member squad for the first of the two-Test home series against South Africa beginning Tuesday at the National Stadium.

Abdullah Shafique, Kamran Ghulam and Salman Ali Agha are the players who have been left out from the list of probables who were part of the training camp in the lead-up to the Test series.

Nauman Ali and Sajid Khan will partner Yasir Shah in the spin department, while the fast bowling line-up includes Haris Rauf, Shaheen Afridi and Tabish Khan, alongside Hasan Ali. Faheem Ashraf and Mohammad Nawaz are the two all-rounders. Pakistan vs South Africa 2021 Schedule: Get Fixtures, Time Table With Match Timings in IST and Venue Details of PAK vs SA Test and T20I Series.

After the second Test which will be played in Rawalpindi from February 4-8, the two teams will compete in three T20 Internationals in Lahore on February 11, 13 and 14.

The last time the two teams met in Pakistan was in 2007 when South Africa beat the hosts 1-0 in a two-match Test series. South Africa are the fourth country to tour Pakistan in the last 15 months after Sri Lanka, Bangladesh and Zimbabwe. Tabraiz Shamsi Shares Video of Tight Security As South Africa Arrive in Pakistan for Bilateral Series After 14 Years.

(The above story first appeared on LatestLY on Jan 24, 2021 05:37 PM IST. For more news and updates on politics, world, sports, entertainment and lifestyle, log on to our website latestly.com).