South Africa cricket team arrived in Pakistan for their first tour in the country in 14 years. The Proteas were escorted from the airport to the team hotel in Karachi by state-head level security and spinner Tabraiz Shamsi even gave his fans a glimpse of the tight security. South Africa are set to play two Tests and three T20Is in Pakistan. 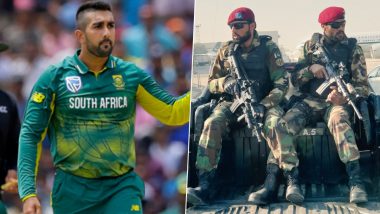 South Africa cricket team arrived in Karachi on January 16 (Saturday) for their first Tour of Pakistan in 14 years. The Proteas, led by captain Quinton de Kock, will play two Tests and three Twenty20 internationals as part of the tour. South Africa last toured the country in late 2007 when they had won a two-Test series 1-0. Pakistan have since hosted South Africa twice in Test series but at the United Arab Emirates. This will be the first time after a decade that South Africa are visiting Pakistan for a tour. South Africa spinner Tabraiz Shamsi shared pictures and a video clip of the team’s journey from the Karachi to Airport under tight security. Pakistan Name 9 Uncapped Players in 20-Member Squad for South Africa Tests.

The Proteas were whisked from the Karachi airport under state-head level security arranged by the Pakistan Cricket Board. Shamsi lauded the authorities for the tight security after the South Africa team reached their hotel. “Security is tight” he captioned a Twitter video showing two armoured police vans leading the convoy. He also shared another picture of the security officials and wrote “Real life Call Of Duty. These guys aren’t playing with small guns and they mean business.” Pakistan vs South Africa 2021: Aleem Dar Delighted to Officiate in His First-Ever Test at Home.

The 21-member South Africa underwent two COVID-19 tests before their departure from Johannesburg and are set to be tested again. Players will be confined to their own rooms before the test results arrive. The first Test of the tour will be played in Karachi from January 26 while the second Test will be held from February 4 at Rawalpindi. The three-match T20I series will be played at the Gaddafi Stadium in Lahore and will be held on February 11, 13 and 14.

(The above story first appeared on LatestLY on Jan 16, 2021 09:11 PM IST. For more news and updates on politics, world, sports, entertainment and lifestyle, log on to our website latestly.com).