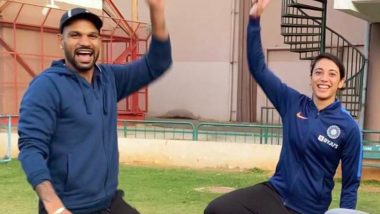 One of the finest batswomen in modern-day cricket, Smriti Mandhana turns 24 on Saturday (July 18) and birthday greetings are pouring in for the southpaw from all around the world. On the occasion, Shikhar Dhawan also took to his official Twitter account and wished the talismanic cricketer. Just like Dhawan, Mandhana is also a left-handed opener who is known to give her side a good start in the initial overs. In fact, when Mandhana burst onto the scene in the 2017 Women’s World Cup with some stupendous knocks, many fans drew comparisons between him and Dhawan. Happy Birthday Smriti Mandhana: Fans Storm Twitter With Wishes.

“Happy birthday @mandhana_smriti! Wishing you loads of luck and continued success Birthday cakeClapping hands sign #HappyBirthdaySmritiMandhana,” wrote Shikhar Dhawan while sharing a picture with Mandhana and Jemimah Rodrigues in which the three cricketers can be seen enacting Dhawan’s thigh-five celebrations. The comment section of the post was filled in no time as fans expressed the desire to see the cricket stars back in action. Meanwhile, have a look at Dhawan's wishes. Smriti Mandhana Birthday Special: 135 vs South Africa and Other Sensational Knocks.

Dhawan and Mandhana are also known to share a great bond as fans have seen them getting involved in a fun live session on Instagram. As of now, the two southpaws are enjoying family time as home amid the COVID-19 crisis. However, they should brace themselves as cricket action is expected to be packed when the game returns.

Meanwhile, BCCI President Sourav Ganguly has made it clear that the national team will not resume practice before August. Nevertheless, the Indian cricket board is planning to host the 2020 edition of the Indian Premier League (IPL) in September-October. If the latest reports are to be believed, IPL 2020 is set to take place in UAE. However, BCCI still have to wait for the official confirmation of International Cricket Council (ICC) regarding the postponement of T20 World Cup.

(The above story first appeared on LatestLY on Jul 18, 2020 07:02 PM IST. For more news and updates on politics, world, sports, entertainment and lifestyle, log on to our website latestly.com).