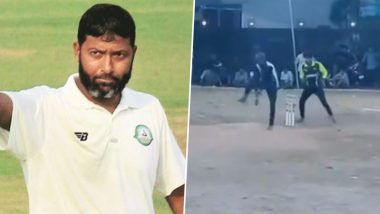 Twenty-20 set-up has arguably defined modern-day cricket and is one of the most popular formats among young fans of the game. The reason behind the shorter format’s rise in popularity in recent years has been the excitement it brings in a smaller time-frame. T20 games are filled with exhilaration, drama and has ultimately forced many cricketers to come up with innovative solutions to win a game. Wasim Jaffer Appointed as Head Coach Of Uttarakhand Ranji Team.

Former Indian cricketer, Wasim Jaffer came up with a suggestion for a new kind of ‘cricket shot’ which the batsmen could use in the 13th edition of the Indian Premier League (IPL 2020). The 42-year-old, who recently retired from all forms of cricket, is a legend in India’s domestic circuit and has also represented the Indian national team in 31 Tests and two ODIs. IPL 2020 Schedule Update: Indian Premier League 13 to Begin on September 19, Night Matches to Have 7:30 PM Start.

Wasim Jaffer is considered by many to be one of the finest batsmen the country has ever produced, to play domestically and internationally in the longest format of the game. The Mumbai-born cricketer hasn’t played in the T20 set-up, but his suggestion of the ‘next innovative shot’ could be used by future cricketers.

The shot suggested by Wasim Jaffer is very much similar to the ‘tweener’ or ‘between-the-legs’ shot popularly used by Tennis players. This shot is mainly performed when the player attempts to recover a lob and has no time to turn back around, and hits the ball backwards between their legs while facing away from the opponent.

Wasim Jaffer is the highest run-getter in Ranji Trophy Cricket, surpassing Amol Muzamdar in November 2018. The Mumbai-born cricketer was also the first batsman to score 11,000 runs in the competition. After a successful career, Jaffer hung his boots in March 2020.

(The above story first appeared on LatestLY on Jul 22, 2020 06:47 PM IST. For more news and updates on politics, world, sports, entertainment and lifestyle, log on to our website latestly.com).