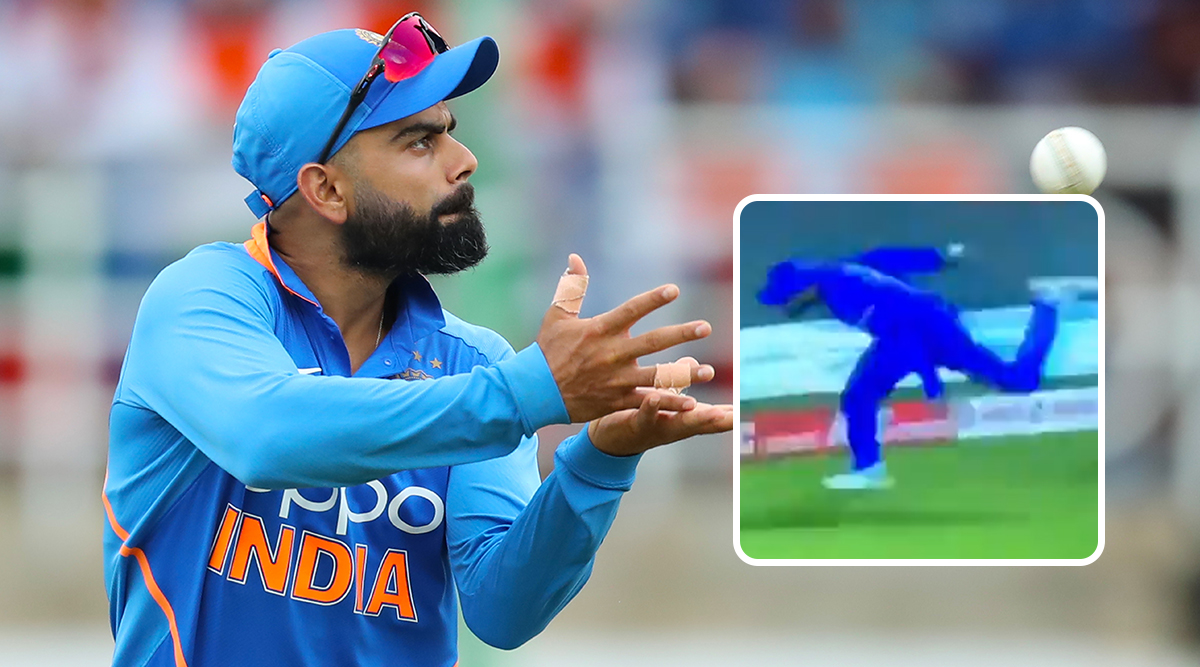 Indian cricketer Virat Kohli showed some outstanding fielding efforts near the boundary during India vs West Indies 2nd T20I 2019. The Indian skipper Virat Kohli took a brilliant catch to send Shimron Hetmyer off the field. Kohli was fielding at long-leg when the West Indies' batsman hit a powerful straight shot towards the boundary. The ball would have definitely reached the boundary, however, Virat Kohli ran quickly to grab the ball well within the field.  WI Beat IND By 8 Wickets | India Vs West Indies, Highlights And Cricket Score 2nd T20I Match.

The incident occurred in the 14th over during Ravindra Jadeja's delivery. Virat not only caught the ball but also managed to save himself from touching the boundary rope. The video of the moment became too popular on social media. Twitterati shared the video as soon as the event happened during IND vs WI 2nd T20I 2019. Have a look at the video below. Twitterati Disappointed With Bowlers As India Lose to West Indies by Eight Wickets in 2nd T20I 2019.

Shimron Hetmyer was batting superbly but he lost his wicket after spectacular fielding efforts by the Indian cricket captain Virat Kohli. He hit 23 runs off 14 balls. West Indies won the match by 2 wickets and levelled the series 1-1. Indian batsmen could not show a brilliant performance like that of the first IND vs WI previous game.

However, Shivam Dube was a batsman worth to watch out for. He smashed 54 off just 30 balls to give a great start to Indian batting. India scored 170-7 after they were asked to bat first. However, Indian bowlers could not defend their score at Greenfield International Stadium in Thiruvananthpuram. The next IND vs WI T20I match 2019 will be played on December 11 (Wednesday) at Wankhede Stadium in Mumbai.