Wasim Akram Birthday Special: 5/21 vs Australia and Other Memorable Performances by the Legendary Pakistan Pacer 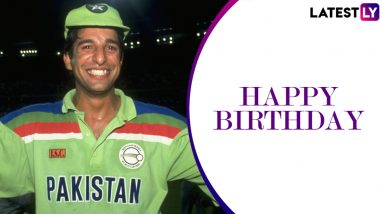 Arguably the best fast bowler to have ever stepped onto the cricket field, Wasim Akram celebrates his 54th birthday on Wednesday (June 3, 2020). The former Pakistan speedster had everything in his arsenal which one needs to breach the batsman's defenses and his record in international cricket speak volumes of his prowess. Hailed as the 'Sultan of Swing,' Akram gave nightmares to many prominent batting line ups in his illustratrious career. Along with his bowling capabilities, Akram will also go down as a great leader who has guided Pakistan to several memorable triumphs. Below, we'll revisit some of his best bowling performances. Wasim Akram Reckons Sledging Virat Kohli Would Have Given Him Chance to Dismiss the Indian Captain.

The left-arm pacer was among those rare breed of cricketers who made their international debut before playing First-Class cricket. Despite that, he burst onto the scenes with some incredible performances. Along with Waqar Younis, the talismanic pacer formed a lethal bowling pair. Akram was also the highest wicket taker of 1992 World Cup and played a key role in guiding Pakistan to the title. Speaking of his numbers, the former pace sensation scalped 414 and 502 wickets in 104 Tests and 356 ODIs respectively. Now, let's focus on some of his best performances.

6/91 Vs West Indies in Faisalabad

The left-arm pacer delivered an incredible spell against a potent Carribbean batting line up in the first Test of West Indies' 1986 Tour of Pakistan. The home side was under the pump after getting bundled out for 159 runs in the first innings. Nevertheless, the youngster came to his side's rescue. The opposition batsmen failed to tackle Akram's vicious deliveries as the pacer took six wickets in the second innings. His efforts proved to be fruitful as the home team went on to win the game by 186 runs.

Akram made an impeccable use of the red cherry in the third Test of Pakistan's 2000 Tour of West Indies and rattled the Carribbean batting line-up. The veteran pacer brilliantly exploited the reverse swing from the Antigua track and took six wickets in the second innings. He continued his impressive form in the last innings of the game too where he took yet another five-wicket haul. His efforts, however, went in vain as the home team clinched the match by one wicket.

Australia were expected to face the spin challenge during their 1994 Tour of Pakistan. However, it was Akram's blistering pace bowling which troubled them in the first Test. He took three crucial wickets in the first innings of the game and put the visitors on backfoot. However, his best show came in the third innings where he claimed a five-wicket haul and played a crucial role in his side's one-wicket triumph.

5/21 Vs Australia in Melbourne

The star pacer enjoyed a purple patch in the 1985 World Championship. His best performance, however, in the tournament came against the mighty Australians. Pakistan could only post 262/6 while batting first and the Aussies looked favourites to win the encounter. However, Akram produced a lethal spell and made a mockery of the Aussie batsmen. He took wickets whenever he came to bowl and didn't give away many runs too. He went on to clinch his maiden five-wicket haul in ODIs as Pakistan won the game by 62 runs.

5/16 Vs South Africa in East London

The talismanic speedster breathed fire with the ball during the fourth match of 1992-93 Total International Series and ran through South Africa's batting line-up. Pakistan were on the backfoot after being able to score only 214/6 while batting first. However, the small-looking total proved to be enough courtsey Akram's jaw-dropping spell. The Proteas batsmen put their guards down against Akram's vicious deliveries and were bundled out for mere 162 runs. As per Duckworth Lewis method, the Men in Green won the game by nine runs.

Akram bid adieu to the game after the ICC Cricket World Cup 2003 and gave a breather to many batsmen around the world. He, however, donned the commentator's hat and continued to be in touch with the game. Akram also served as a bowling coach for many teams including the Kolkata Knight Riders in the Indian Premier League (IPL).

(The above story first appeared on LatestLY on Jun 03, 2020 09:00 AM IST. For more news and updates on politics, world, sports, entertainment and lifestyle, log on to our website latestly.com).