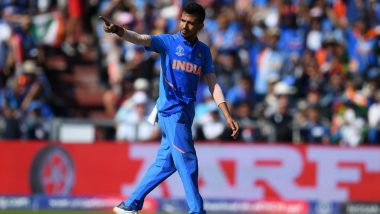 Indian leg-spinner Yuzvendra Chahal celebrates his 30th birthday on July 23, 2020 (Thursday). Chahal made his India debut on June 11, 2016 in an ODI match against Zimbabwe. He also made his T20I debut against the same team. Chahal has so far represented India in 52 ODI matches and 42 Twenty20 internationals. He also represents Royal Challengers Bangalore (RCB) in the Indian Premier League (IPL) and has one of their key players since joining them in 2014. Chahal is one of the most loved figures in the Indian dressing room and is a known prankster in the team. Yuzvendra Chahal Goes Down Memory Lane; Shares Throwback Picture with MS Dhoni, Hardik Pandya, Rishabh Pant and Kuldeep Yadav.

Chahal first broke into the limelight in 2011 when he led Mumbai Indians to the Champions League Twenty20 title after beating his future team RCB in the final. Chahal took two wickets and gave away only nine runs in three overs. Mayank Agarwal and Arun Karthik were the two batsmen he dismissed in the final helping Mumbai Indian win by 31 runs and clinch the title. As Chahal celebrates his 30th birthday, take a look at some interesting facts about him. Yuzvendra Chahal Explains Rohit Sharma’s ‘True Reason’ for Happiness After Real Madrid’s 34th LaLiga Title Win.

He made his international debut against Zimbabwe and won the Player of the Match award in his only second appearance after taking three wickets for only 26 runs and leading his side to an eight-wicket win. Chahal has since gone on to become India’s spin specialist in limited-overs cricket.

(The above story first appeared on LatestLY on Jul 23, 2020 07:00 AM IST. For more news and updates on politics, world, sports, entertainment and lifestyle, log on to our website latestly.com).