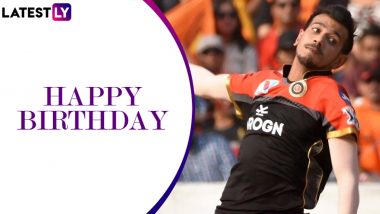 Indian cricket team spinner Yuzvendra Chahal turns 30 today. Chahal was born on July 23, 1990, in Jind, Haryana. The spinner made his debut for India in 2016 against Zimbabwe in One-Day International (ODI) and a few days later played his first T20I as well. Chahal, who bowls, leg-break is yet to feature in Tests for India. In Indian Premier League (IPL) the 30-year-old spinner plays for Royal Challengers Bangalore (RCB). Happy Birthday Yuzvendra Chahal: A Look At 5 Funny Moments of the Spinner As he Turns 30.

Before joining RCB, Chahal was picked by Mumbai Indians, and he represented the franchise in Champions League T20. For RCB, Chahal has been an important member of the team. He has played 84 IPL matches and has picked 100 wickets. As the spinner turns 30, we take a look at some of his memorable performances in IPL.

3/10, RCB vs GL, IPL 2016: Chahal picked 21 wickets in IPL 2016, and one of his best performances came in that season. After RCB posted mammoth 248, Chahal picked 3/10 to unsettle the Gujarat Lions further. His wickets included Brendon McCullum and Dwayne Bravo.

4/25, RCB vs KXIP, IPL 2016: The spinner registered his best IPL bowling figures in 2016 against Kings XI Punjab. Defending a total of 211, RCB restricted KXIP to 120 with Chahal accounting for four wickets.

(The above story first appeared on LatestLY on Jul 23, 2020 08:53 AM IST. For more news and updates on politics, world, sports, entertainment and lifestyle, log on to our website latestly.com).