Happy Birthday Yuzvendra Chahal: A Look At 5 Funny Moments of the Spinner As he Turns 30 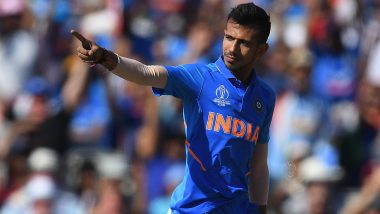 Yuzvendra Chahal is one of the best spinners produced by the country. He has also represented India internationally in chess at youth levels. He plays for Haryana in domestic cricket and Royal Challengers Bangalore (RCB) in Indian Premier League. Chahal is the second player in T20I history to have taken a six-wicket haul. Apart from snapping wickets with his spells, Yuzi is also popular for hosting Chahal TV were many cricketers from the Indian team have made an appearance. Apart from all this, he is also popular for making funny videos. The clips have gone viral on social media and have tickled the funny bones of the people. As the spinner turns 30, let’s have a look at five of his funny moments below: Yuzvendra Chahal Pulls Umpire Marais Erasmus' Cheeks Before IND vs BAN World Cup 2019 Match, Draws Funny Reaction on Twitter.

When the India wicket-keeper Rishabh Pant was training hard in the gym, our Indian spinner happened to be around him and video bombed him. While Pant was busy sweating it out in the gym, Yuzi was imitating him. The camera person made sure to capture the moves by Yuzi.

When Yuzi’s sister gave him a taste of his own medicine:

This time it was Yuzi’s sister Geetanjali who made an appearance in his video and gave him a taste of his own medicine via a prank call. Usually one would expect Yuzi to come up with this kind of humour. But his sister was equally good.

With his mom and dad:

This time his parents appeared on the video along with Yuzi. This time it was Yuzi's mother who donned a hat of a mischievous child who hits the cricketer's father. But the price was paid by Yuvi.

Here is a guy who failed but didn't know how to tell his father. The hilarious clip will surely make you go ROFL. Make sure you watch the video till the end

Yuzvendra Chahal and family were seen shaking a leg in this video. Yuzi walks away with the limelight with his funny expressions.

That's all we have right now in terms of his video. If we have missed out on any funny videos, feel free to add on below in the comments section. Coming back to Yuzi's birthday, we wish him a very Happy Birthday!

(The above story first appeared on LatestLY on Jul 23, 2020 08:45 AM IST. For more news and updates on politics, world, sports, entertainment and lifestyle, log on to our website latestly.com).