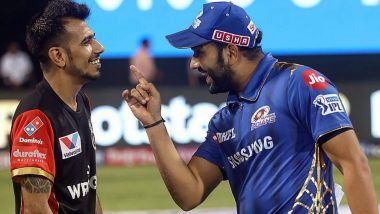 With the COVID-19 pandemic putting a pause on several major cricket tournaments, only thing the players can do is to cherish the old memories. Well, India's star leg-spinner Yuzvendra Chahal is certainly doing that. Recently, the bowler took to his official Instagram account and shared a throwback picture with India's swashbuckling opener Rohit Sharma. The snap was clicked when the two stars were involved in a fun conversation during an Indian Premier League (IPL) match between Royal Challengers Bangalore and Mumbai Indians. Rohit Sharma Unveils Story Behind His Famous Nickname ‘Hitman’ (Watch Video).

“Because brothers don’t let each other wander in the dark alone..!! #rohitaaasharaaamaaa,” wrote Rohit while sharing the picture on the picture-sharing website. Rohit and Chahal have played a lot of cricket with each other and are known to share a great bond too. On numerous occasions, the two stars have got involved in banter on social media. In recent times, in fact, Rohit has trolled his teammate many times due to his antics on social media. However, their relationship still remains intact and they must be eagerly waiting to join each other on the field. Meanwhile, have a look at the post.

Because brothers don’t let each other wander in the dark alone..!! 🤝🤝 #rohitaaasharaaamaaa 😋

In normal circumstances, Chahal and Rohit would have been busy with their respective sides in the latter half of IPL 2020. However, just like many other major sporting events, the T20 extravaganza has also been postponed indefinitely owing to the global health scare.

Nevertheless, the Board of Control for Cricket in India (BCCI) is planning to resume the training session of Indian Cricket Team at National Cricket Academy (NCA) in Bengaluru. However, skipper Virat Kohli and his deputies Rohit Sharma and Ajinkya Rahane are like to remain stranded in Mumbai as their city comes under the most affected region in India.

(The above story first appeared on LatestLY on May 21, 2020 05:37 PM IST. For more news and updates on politics, world, sports, entertainment and lifestyle, log on to our website latestly.com).