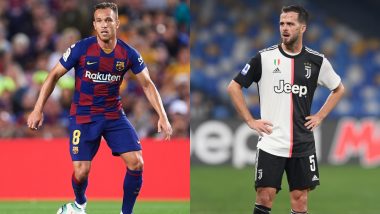 Juventus and Barcelona have agreed terms for the sensational player-swap deal involving Arthur Melo and Miralem Pjanic. Although initially, the deal looked to be off after Arthur expressed his desire to remain at Barcelona and fight for his place, reports now state that the deal could actually happen. Both clubs had been chasing each other’s midfielders for some time now and were interested in doing a straight player-swap deal. Pjanic had already agreed personal terms with Barcelona but Arthur was resolved in his stance of remaining at Camp Nou. Juventus Agree Transfer Fee With Barcelona for Brazilian Midfielder: Reports

But according to latest reports, the player has softened his stance and has agreed for a move to Serie A. Sky Sports journalist and transfer guru, Fabrizio Romano also put out a tweet that both clubs have now agreed a swap deal, which will see Arthur join Juventus while Pjanic will move to Barcelona. Ansu Fati’s Father Responds to Manchester United Transfer Links, Says ‘He Is Comfortable in Barcelona’.

Barcelona will also receive an additional €10M for the signing of Arthur. “Arthur has accepted Juventus bid! He’s going to join Juventus on a swap deal - Miralem Pjanic (+ €10M) to Barcelona as part of the agreement,” Romano said in his tweet.

Arthur has accepted Juventus bid! He’s going to join Juventus on a swap deal - Miralem Pjanic (+ €10M) to Barcelona as part of the agreement. Last details to be resolved and then here we go! 🔴 #Juventus #Barcelona #FCB #transfers

The La Liga giants had earlier refused for a straight player-swap deal citing that Arthur was still young and was valued more than the 30-year-old Pjanic. Barcelona were also not ready to pay more than €60M for Pjanic. The current deal, therefore, looks perfect for both clubs.

Arthur joined Barcelona from Brazilian club Gremio in 2018 and was seen as the future replacement for Andre Iniesta. But the 23-year-old has struggled to make an impact this season after enjoying a good debut campaign at Camp Nou. Pjanic, on the other, joined Juventus from AS Roma in 2016 and has developed into a midfield main-stay at the club.

But despite four fruitful seasons in Turin, the 30-year-old had fallen out of favour under current Juventus manager Maurizio Sarri this season. Sarri had targeted both Arthur and Jorginho from Chelsea as a replacement for the Bosnian playmaker.

(The above story first appeared on LatestLY on Jun 25, 2020 09:13 PM IST. For more news and updates on politics, world, sports, entertainment and lifestyle, log on to our website latestly.com).