A new-look Barcelona, this time without Lionel Messi, would be aiming for retribution for that 8-2 drubbing in the 2019-20 Champions League season and though it would be difficult without the Argentine star in their ranks, the Catalans can look fpr inspiration from Memphis Depay, who has been in good form so far. 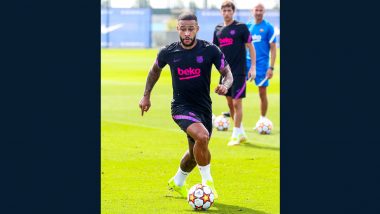 The last time Barcelona played Bayern Munich in the Champions League, the Catalonians were annihilated 2-8 by the German champions. The catastrophic loss led to a large-scale exodus at FC Barcelona and did the club unprecedented damage in terms of its popularity. Today a new-look Barcelona will play host to the Bavarians without their talismanic player Lionel Messi, who has moved to PSG. Although the side has not improved much since that defeat, they have done well to secure 7 points from 3 games in La Liga. Opponents Bayern Munich had an opening day setback in the Bundesliga but with a hat-trick of wins on the bounce, they are looking in top shape. Barcelona versus Bayern Munich will be telecasted on Sony Ten network and streamed on Sony Liv app from 12:30 am IST. Barcelona's Martin Braithwaite To Miss Bayern Munich Clash In UEFA Champions League 2021-22 Due To Injury

Sergio Aguero, Ansu Fati and Ousmane Dembele have been ruled out for Barcelona due to injuries which is a problem for the hosts. Memphis Depay has looked sharp in the games he has played and all eyes will be on the Dutchman as he links up with Phillipe Coutinho and Luuk de Jong in a front three. Skipper Sergio Busquets is the calming influence in the middle with Frenkie de Jong and Pedri looking to push up and assist the forwards.

Serge Gnabry picked up a knock against Leipzig and is set to undergo a late fitness test to determine his availability for Bayern Munich. Jamal Musiala is the ideal replacement for the former Arsenal man should he fail to make the cut. Robert Lewandowski and Thomas Muller continue to spearhead the Bavarian’s attack while the likes of Joshua Kimmich and Leon Goretzka spray the passes from a deep-lying midfield position. Bayern Munich start as the favourites against Barcelona given the latter has lost some of its old prestige and quality. The hosts will have to put in a spirited show for them to gain three points from the match.

Barcelona vs Bayern Munich clash in UEFA Champions League 2021-22  will be played at the Camp Nou in Barcelona, on September 15, 2021 (Wednesday). The game has a scheduled time of 12:30 am IST (Indian Standard Time).

Sony Pictures Network are the official broadcasters of UEFA Champions League 2021-22 in India and will telecast the games live on its channels. Fans can tune into Sony Ten 2 HD/SD channels to watch the live telecast of Barcelona vs Bayern Munich on TV.

Sony Pictures Network’s official OTT platform Sony Liv will be streaming the game live for its fans in India. You can tune into the Sony Liv app or website to watch Barcelona vs Bayern Munich, UEFA Champions League 2021-22 live streaming online. JioTV would also provide live streaming for this match.

(The above story first appeared on LatestLY on Sep 14, 2021 10:08 PM IST. For more news and updates on politics, world, sports, entertainment and lifestyle, log on to our website latestly.com).