Barcelona have the chance to go level on points with arch rivals Real Madrid albeit temporarily when they taken on Getafe at home. With 49 points from 23 games, Barcelona have had a season with lots of ups and downs. 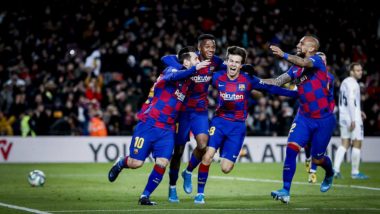 Barcelona have the chance to go level on points with arch rivals Real Madrid albeit temporarily when they taken on Getafe at home. With 49 points from 23 games, Barcelona have had a season with lots of ups and downs. With a new manager coming in midway in the form of Quique Steien, the fans will need to show patience specially with important set of games coming up. Getafe have won four in a row and can make lives difficult for the Catalonians at Nou Camp. Champions League qualification is a priority for the visitors and that should drive them against a quality team like Barcelona. Barcelona Vs Getafe Live Football Score.

Celement Lenglet is suspended for the tie which is a huge blow for Barcelona considering their defence has not been at their best for quite some time. Injuries to Ousmane Dembele and Luis Suarez has further complicated situation. The absence of these two superstars has put additional pressure on skipper Lionel Messi. The Argentine in the playmaker role often ends up in deep position and that can have an impact on his goalscoring stats. Arturo Vidal is in contention for a start to help Messi push forward while Sergio Busquets can maintain the balance in the sweeper role.

Getafe are betting big on the strike partnership of skipper Jorge Molina and Jaime Mata. 37 year old Molina still packs a punch on the big stage and should keep Barcelona’s backline busy. Former Barcelona man Marc Cucurella is another threat with his raw pace and crossing abilities while Mauro Arrambarri will have to toil hard to break Barcelona’s play.

Barcelona vs Getafe CF La Liga 2019-20 football match is scheduled to take place on February 15,  Saturday night. The match will kick off at 08:30 pm IST (Indian Standard Time) and will be held at Camp Nou.

Sadly, Barcelona vs Getafe CF live telecast will not be available on any TV channels in India as there is no official broadcaster for Spanish La Liga 2019-20. Sony Pictures Sports Network (SPN) did telecast previous season in India.

Where to Get Free Live Streaming Online of Barcelona vs Getafe CF La Liga 2019-20 Football Match?

Despite the unavailability of the official broadcaster of Spanish La Liga in India (which means no Hot Star or Sony Liv app), one can still catch Barcelona vs Getafe CF match online via live streaming on La Liga's official Facebook page. You can also follow LatestLY for live football score updates. Barcelona have not lost in their last 14 home games against Getafe winning 10 of those games. Getafe will create a few chances but Barcelona will prove to be too tough a task for the visitors.

(The above story first appeared on LatestLY on Feb 15, 2020 04:00 PM IST. For more news and updates on politics, world, sports, entertainment and lifestyle, log on to our website latestly.com).