Fernandes hasn't performed to his expectation in both the matches that Portugal have played so far. Cristiano Ronaldo's Portugal currently have one win from two matches and would seek a win against world champions France to secure a spot in the last-16. 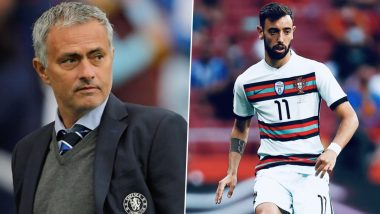 Jose Mourinho has launched a scathing attack on Portugal's Bruno Fernandes following the midfielder's poor performance in the ongoing Euro 2020. Portugal started off their Euro 2020 defense on a high with a thumping 3-0 win over Hungary but fell to a 2-4 loss at the hands of Germany in their next game. With just one win and the last group match against world champions France remaining, Portugal have a real task at hand to prevent an unlikely exit from the European championships. Mourinho particularly wasn't impressed with Fernandes' performance in these two matches and criticised the 26-year old saying, "Portugal at its highest level can beat anyone. But we need to play with 11 players, in these two matches Bruno Fernandes was on the pitch but not playing." Cristiano Ronaldo Preps Up for Portugal vs France, Euro 2020, CR7 Shares Photos on Social Media

Commenting on Portugal's attack, Mourinho stated that he is eager to watch Fernandes step up and perform beside the other 'fantastic forwards.' "Portugal has three fantastic attacking players, Bernardo Silva, Cristiano [Ronaldo] and [Diogo] Jota. We need that connection, but until now Bruno is not playing," he said.

Fernandes is yet to deliver for Portugal in Euro 2020 and fans would be hopeful that the Manchester United star comes up with his best when they take on France in a repeat of the last Euro final. Even Mourinho hoped he would do well. "I hope he turns up against France, because he's a player with incredible potential. He can pass, he can score. He can get penalties, he can score penalties, he can score free-kicks. He has a lot to give, but the reality is in these two matches he was not there," the soon-to-be Roma manager added.

(The above story first appeared on LatestLY on Jun 23, 2021 08:02 PM IST. For more news and updates on politics, world, sports, entertainment and lifestyle, log on to our website latestly.com).