Mo Salah bagged a hat-trick in the game against Leeds to spare the Liverpool’s blushes. The Egyptian striker will be hoping to continue his rich vein of form against Chelsea who do not have a stable defence. Fabinho should partner club captain Jordan Henderson in midfield. 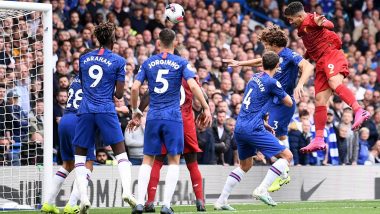 The first high octane encounter in the Premier League is fast approaching with Chelsea hosting defending champions Liverpool. Both the teams won their first game in contrasting fashion with the Reds stretched to the limit by Leeds. Frank Lampard, who has invested heavily in the summer will need some time before his superstars develop a telepathic understanding. But with the pressure of managing a top club like Chelsea insane, Lampard will need victories in these games to gain the trust of the board. Liverpool have got two world-class players in space of 24 hours with Thiago Alcantara and Diego Jota both joining the Reds which adds quality in their squad. Chelsea versus Liverpool will be telecasted on Star Sports network and streamed on Hotstar from 9:00 pm IST. CHE vs LIV Dream11 Prediction in Premier League 2020–21: Tips to Pick Best Team for Chelsea vs Liverpool Football Match.

Thiago Silva and Ben Chilwell have begun first team training at Stamford Bridge but the game is still too early for them to feature. Ruben Loftus-Cheek was poor against Brighton and will likely make way for Ross Barkley. Kai Havertz and Jorginho in central midfield did okay in the last game but a lot more is expected from them considering the potential they possess. Timo Werner in the lone striker role should start despite suffering a niggle against Brighton.

Mo Salah bagged a hat-trick in the game against Leeds to spare the Liverpool’s blushes. The Egyptian striker will be hoping to continue his rich vein of form against Chelsea who do not have a stable defence. Fabinho should partner club captain Jordan Henderson in midfield with the Thiago Alcantara starting on the bench. Georginio Wijnaldum, a player linked with a move to Barcelona, is also expected to start.

Chelsea vs Liverpool match in Premier League 2019-20 will take place on September 20, 2020 (Sunday). The match will be played at the Stamford Bridge in Fulham and will begin at 09:00 pm IST (Indian Standard Time).

Where to Get Live Telecast of Chelsea vs Liverpool, Premier League 2020-21 Football Match?

How to Get Free Live Streaming of Chelsea vs Liverpool, Premier League 2020-21 Football Match?

Premier League 2020-21 can be viewed on Disney+ Hotstar, the official OTT platform of Star Sports. So fans can either download the Disney+ Hotstar app or log onto the website, to watch the live streaming of Chelsea vs Liverpool match. Liverpool need to improve their defence if they are to get a positive result from Stamford bridge. A scored draw is what our prediction is for the game.

(The above story first appeared on LatestLY on Sep 20, 2020 02:18 PM IST. For more news and updates on politics, world, sports, entertainment and lifestyle, log on to our website latestly.com).