Cristiano Ronaldo made a sensational return to Manchester United this summer and has been scoring goals, bringing back memories of his old form but Antonio Cassano says that the Portugal star is nowhere near his list of top five greatest footballers of all time. 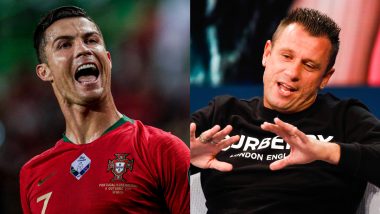 Cristiano Ronaldo might be one of the top stars in football history but he doesn't find a spot in Antonio Cassano's list of the top greatest five footballers of all time. Cassano, a former Italy and Real Madrid striker, has launched an attack on Ronaldo, after his agent Jorge Mendes claimed that the Ballon d'Or should be awarded to the Portuguese star this season. While speaking on Christian Vieri's Twitch channel 'Bobo TV', he expressed his thoughts on this development and claimed that Ronaldo doesn't even make his list of top five greatest footballers in history--the likes of which include Pele, Diego Maradona, Lionel Messi, Johan Cruyff and former Brazilian hitman Ronaldo Nazario. Cristiano Ronaldo Pumped Up for Manchester United’s UEFA Champions League 2021–22 Clash Against Atalanta, Writes, “Our Time Is Coming” (Check Post)

"Enough theatre (from Jorge Mendes)," Cassano said on the Twitch channel, adding, "Is Cristiano Ronaldo the best in the history of football? He is not even in the top five. 'Messi, Pele, Maradona, Cruyff and Ronaldo are on another level." However, this is not the first time that Cassano has spoken up against Cristiano Ronaldo. Earlier, he had said, "Cristiano only thinks about his goals and records. He's always been a bit selfish, he doesn't give a damn about others scoring goals. He does not live for the game - he lives for the goal and in this moment the situation is getting worse. I think Cristiano has done terribly over the last three years."

Mendes, who has been Ronaldo's agent for a long time, earlier claimed that the Portuguese deserves to win his sixth Ballon d'Or title. If this happens, he would be level with rival Lionel Messi, who too has six titles to his name. "The figures and statistics linked to the name of Cristiano Ronaldo speak for him and should be enough in my opinion for him to win another Ballon d'Or. The absolutely remarkable total of 115 goals for the Portuguese national team makes him the record holder in the history of men's international football. This year he broke this 15-year-old record, to which he can add that to being the top scorer in the history of professional football," Mendes said, as quoted by Goal.com. Cristiano Ronaldo Forced By Ole Gunnar Solskjaer to Clap For Travelling Manchester United Fans After 4-2 Loss Against Leicester City in EPL 2021-22: Reports

Ronaldo was named in the provisional list of candidates for the Ballon d'Or this year but he is nowhere near talks about winning a sixth title. All the discussion about a potential winner is currently centering around Robert Lewandowski, Jorginho,  and Lionel Messi, with the Argentine being the favourite to bag his seventh Ballon d'Or title.

(The above story first appeared on LatestLY on Oct 20, 2021 12:05 AM IST. For more news and updates on politics, world, sports, entertainment and lifestyle, log on to our website latestly.com).