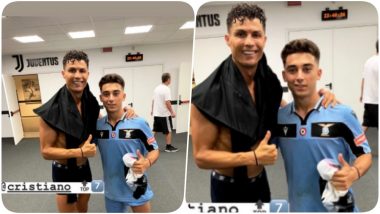 Most of the times, Cristiano Ronaldo has displayed sportsmanship to his opponents. After Juventus won the match against Lazio 2-1, he even hugged Ciro Immobile after the Serie A 2019-20 match as the two players reached the 30-goal mark in the Italian league. The picture and video of two players hugging each other had gone viral on social media. But more than the picture the reaction of this player Raul Moro was talked about by the netizens. If one had to look at the picture closely, this youngster was awestruck snapped as the two hugged each other.  The 17- year-old went to the dressing room of Juventus and made to click a picture with the five-time Ballon d'Or winner. Cristiano Ronaldo Hugs Ciro Immobile After Juventus vs Lazio, Serie 2019-20 As Both Players Reach 30-Goal Match in the League (Watch Video).

Cristiano Ronaldo even gifted him a jersey of his own. Needless to say that the 17-year-old youngster was on could nine and he shared the picture with CR7 on his Instagram story. He even tagged CR7 in the snap. The picture was shared further on social media by a few fan pages. Check it out below:

Here is the picture of his reaction:

(The above story first appeared on LatestLY on Jul 22, 2020 05:11 PM IST. For more news and updates on politics, world, sports, entertainment and lifestyle, log on to our website latestly.com).