Cristiano Ronaldo had a noteworthy individual campaign but it was on the collective front that Juventus struggled, both domestically and in Europe. The five-time Ballon d’Or winner became the first player to top the scoring charts in Italy, Spain and England’s first divisions but wasn’t able to guide the Turin giants to similar heights. 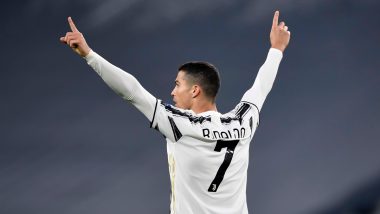 ‘With these achievements, I reached a goal that I had set myself since the first day I arrived in Italy’ wrote Cristiano Ronaldo on his latest Instagram post while reflecting on the recently concluded domestic footballing season. The Portuguese star has spent three years at Juventus and is now approaching the final 12 months of his contract with the Bianconeri but his future remains unclear after a mixed campaign. Cristiano Ronaldo’s Juventus Future Uncertain After CR7 Was Benched for Bianconeri’s Last Serie A 2020–2021 Match.

Cristiano Ronaldo had a noteworthy individual campaign but it was on the collective front that Juventus struggled, both domestically and in Europe. The five-time Ballon d’Or winner became the first player to top the scoring charts in Italy, Spain and England’s first divisions but wasn’t able to guide the Turin giants to similar heights. Cristiano Ronaldo’s Diminishing Role at Juventus an Indication That Bianconeri Are Preparing for Life After Portuguese Star.

For the first time in a decade, Juventus were unable to defend the Serie A crown and once again had an underwhelming outing in Europe, getting eliminated in the UCL round of 16 for the second consecutive season and this time by Portuguese outfit Porto. Although Juventus did manage to lift the Coppa Italia, the season was considered to be an unsuccessful one.

After a disappointing season, Juventus are looking to rebuild the team, which has raised doubts over the future of several Bianconeri stars including Cristiano Ronaldo. The Portuguese is tipped to move away from Turin in the summer with a return to one of his former clubs or a new challenge in Paris reportedly on the cards.

And with Ronaldo's continuity in Italy remaining uncertain, the 36-year-old might have hinted about his future in his most recent Instagram post, saying he has achieved the targets he set out when making a stunning switch from Spain to Italy in the summer of 2018 by winning domestic titles and gathering goal-scoring accolades.

Champions League was Juventus’ main focus when they signed Cristiano Ronaldo from Real Madrid but the Portuguese star hasn’t been able to replicate his heroics in the competition for the Black and Whites with a quarter-final appearance being the Bianconeri’s best finish since his arrival. And with European glory remaining out of reach, huge changes are expected in Turin this summer.

The 36-year-old may form a part of that process as his role at the club has been reduced in recent games with Andrea Pirlo suggesting he had a huge squad to choose from when asked about the Portuguese’s lack of game time. Although no official decision has been made until now, it will be interesting to see where Cristiano Ronaldo’s future lies.

(The above story first appeared on LatestLY on May 25, 2021 04:40 PM IST. For more news and updates on politics, world, sports, entertainment and lifestyle, log on to our website latestly.com).