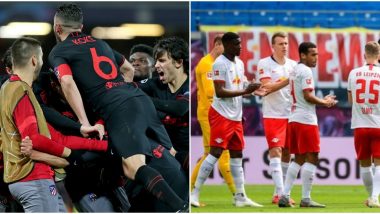 Atletico Madrid will play RB Leipzig in the quarter-final of the 2019-20 UEFA Champions League for a place in the final four. Atletico knocked out defending champions Liverpool in the previous round while Leipzig beat Tottenham Hotspur to advance to the quarter-finals. The winner of this contest will meet Paris Saint-Germain, who beat Atalanta 2-1 in the first quarter-final, in the semis. Meanwhile, football fans in India searching for how to watch the Atletico Madrid vs RB Leipzig match in India can scroll down for all details, including live telecast, live streaming online and live score updates for the UCL 2019-20 clash. Atletico Madrid vs RB Leipzig, UEFA Champions League Live Streaming Online.

Diego Simeone’s side are also unbeaten in their last 18 matches. Atletico will miss Angel Correa and right-back Sime Vrsaljko, both tested positive for COVID-19, but the remainder of the squad is fit and ready. Leipzig are without striker Timo Werner, who joined Chelsea.

RB Leipzig vs Atletico Madrid match in UEFA Champions League 2019-20 will be played at the Jose Alvalade Stadium in Lisbon. The match will take place on August 14 (Thursday midnight) and has a scheduled start time of 12:30 am IST (Indian Standard Time).

In India, fans can catch the live action of Atletico Madrid vs RB Leipzig match on SonyLiv channels. Sony Pictures Sports Network (SPSN) is the official broadcaster for UCL 2019-20 in India. Fans can live telecast the match on Sony Ten 2 and Sony Ten 2 HD channels. Live streaming of the LEP vs ATL match will be available on SonLiv, the OTT platform of Sony Sports.

Leipzig have kept three clean sheets in their last five Champions League games. They beat Tottenham Hotspur 4-0 over both legs and have lost just once in their 15 games matches in the Bundesliga.

(The above story first appeared on LatestLY on Aug 13, 2020 10:30 PM IST. For more news and updates on politics, world, sports, entertainment and lifestyle, log on to our website latestly.com).