How to Watch Benevento vs Juventus, Serie A 2020–21 Live Streaming Online in India? Get Free Live Telecast of Football Game Score Updates on TV

Juventus will aim for a third successive victory when they visit newly-promoted Serie A side Benevento in their next match on Saturday. The defending league champions beat Cagliari and Ferencvaros in their last two matches and will want to carry on the momentum. They are fifth in the points table and face a side 14th in the standings. 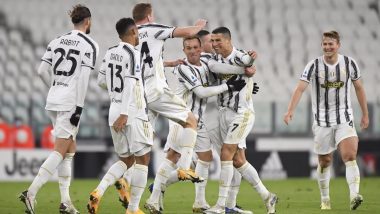 Juventus will look to extend their two-match winning streak when they visit newly-promoted Serie A side, Benevento, in their next league fixture on November 28, 2020 (Saturday). Juventus are fifth in the Serie A 2020-21 points table and are four points behind leaders AC Milan after eight rounds of matches. They have won and drawn four each while their opponents Benevento have won three and lost five on their eight matches and are 14th in the standings. Meanwhile, fans in India searching for how and where to watch the Benevento vs Juventus, Serie A 2020-21 match should scroll down for all details. When Diego Maradona Perfectly Summed Up the Lionel Messi vs Cristiano Ronaldo Debate.

Visiting coach Andrea Pirlo have only one recognised centre-back among his fit players. Leonardo Bonucci has returned to training but is doubtful for this match while Merih Demiral is out after taking a knock against Cagliari and Giorgio Chiellini is still out with injury. Benevento are also missing Gaetano Letizia, Massimo Volta and Alessandro Tuia due to injuries while Bryan Dabo is in self-isolation after testing positive for COVID-19. Georgina Rodriguez, Cristiano Ronaldo’s Girlfriend Leaves Fans Gushing With Her Latest Instagram Post, Sizzles in Sultry Bikini As She Enjoys Some Cosy Time (View Pic).

Benevento vs Juventus, Serie A 2020-21 Match Time and Schedule in India

Benevento vs Juventus Serie A match will be played on November 28, 2020 (Saturday). The game is scheduled to begin at 10:30 pm IST (Indian Standard Time) and will be held at the Ciro Vigorito Stadium.

How to Watch Benevento vs Juventus, Serie A 2020-21 Live Telecast and Free Live Streaming Online in India

Fans in India can live telecast be Benevento vs Juventus Serie A match on Sony Sports channels.  Sony Pictures Sports Network (SPSN) is the official broadcaster for Serie A 2020-21 in India. So fans can catch the live telecast of Benevento vs Juventus match on Sony Ten 2 and Sony Ten 2 HD channels. The match will also be live on Sony’s online streaming media platform SonyLiv.

(The above story first appeared on LatestLY on Nov 28, 2020 09:25 PM IST. For more news and updates on politics, world, sports, entertainment and lifestyle, log on to our website latestly.com).