Who's better between Cristiano Ronaldo and Lionel Messi? This unarguably has been the hottest topic of discussion in the football world since the last two decade. While fans and experts presented different opinions on this debate, football legend Diego Maradona – who breathed his last on November 25, 2020 – had perfectly summed up the discussion. 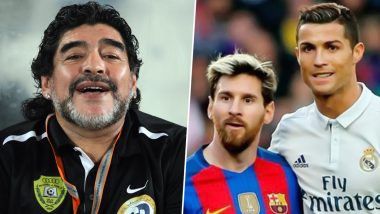 Who's better between Cristiano Ronaldo and Lionel Messi? This unarguably has been the hottest topic of discussion in the football world since the last two decade. While fans and experts presented different opinions on this debate, football legend Diego Maradona – who breathed his last on November 25, 2020 – had perfectly summed up the discussion. While the Argentina talismanic picked his countryman as a better player, he wished Ronaldo was Argentine and compared him to Gabriel Batistuta. "I prefer Messi to Cristiano Ronaldo, but I acknowledge that the latter is an animal," he had explained. Lionel Messi Mourns Diego Maradona’s Death, Says ‘Will Keep All Beautiful Moments Lived With Him.’

"I wish he was Argentine. He's incredible. He makes me think of Gabriel Batistuta. As soon as he touched the ball, it was a goal," he added. Praising he Portuguese star further, he said: "From the few players that I saw, amongst the greatest were [Alfredo] Di Stefano, [Johan] Cruyff, Messi - Cristiano Ronaldo could be in there as well." Pele vs Diego Maradona: A Rivalry that Found Peace in Bitterness.

While Maradona called Ronaldo a brilliant player, his praises for Messi was at a different level altogether. "I can't remember having seen Lionel Messi play badly. There are players who have been touched by a magic wand. We Argentines are proud that Lionel Messi is Argentinian," he said.

On being asked about if Messi can single-handedly guide Argentina to FIFA World Cup, the 1986-World Cup winner said: "Alone, he will not be able to win the World Cup. You need a solid team for that. Football history will remember Messi."

"Football has given him a lot, as much as he has given the sport and to win a World Cup, in my opinion, wouldn't bring himself anything else," he opined.

Meanwhile, Maradona passed away at 60 after suffering a heart failure. Messi was indeed heartbroken with the news as he paid an emotional tribute to the former Argentina coach. "A very sad day for all Argentines and for football. He leaves us but does not go away, because Diego is eternal," the Barcelona and Argentina talisman wrote on Instagram alongside two pictures of himself with Maradona.

Maradona led Argentina to the World Cup title in 1986, scoring perhaps the greatest goal in football in that tournament. It was also here that he scored his infamous 'Hand of God' goal for Argentina. Maradona was also a success story in club football and numerous trophies with each club he played. His best run, however, came at Napoli, who he joined from Barcelona in 1984 and led the club to their first-ever Serie A title in 1987.

(The above story first appeared on LatestLY on Nov 28, 2020 11:08 AM IST. For more news and updates on politics, world, sports, entertainment and lifestyle, log on to our website latestly.com).