Isco has only played 20 times this season. Most of them have come from the bench. His latest appearances have only come as the club is going through an injury crisis. In the last three seasons, Isco has played 87 matches and is reportedly looking elsewhere for more game time. The 28-year-old’s current contract at the club expires in June 2022. 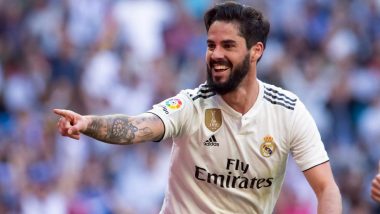 Real Madrid outcast Isco could make his way out of the club after falling out of favour of Madrid boss Zinedine Zidane. The 28-year-old has been linked with Series A side Inter Milan, who are looking to strengthen their midfield and wants the Spaniard as their playmaker. Isco once touted as one of Spain’s best playmaker, has found it hard to break into the Madrid starting XI with the club not exactly playing a formation that would suit the Spanish playmaker. In his eight seasons at the club, Isco has won numerous trophies but has only been limited to making appearances from the bench. Real Madrid vs Liverpool: Sergio Ramos in Doubt For UCL 2020-21 Encounter With Fresh Injury Concerns.

Isco has only played 20 times this season. Most of them have come from the bench. His latest appearances have only come because the club is currently under an injury crisis. In the last three seasons, Isco has managed only 87 matches and is reportedly looking elsewhere for more game time. The 28-year-old’s current contract at the club expires in June 2022. But he could before that and is likely to be sold this summer for the right price with a renewal at Madrid out of question. Cristiano Ronaldo Transfer Update: Marcelo’s Comment Adds to Speculation of CR7’s Return to Real Madrid.

According to a report from Sport, Inter Milan coach Antonio Conte has requested the club to sign the Spanish playmaker this summer. With Madrid facing the danger of losing him for free at the end of next season, they could be forced to sell Isco at a cut-out price and Inter are looking to take advantage of that to bring the talented playmaker to San Siro. The report also states that Inter still owe Madrid money for the signing of right-back Achraf Hakimi last summer and face a tricky situation at going for a player from the same club.

Isco, 28, has won the UEFA Champions League four times and the La Liga title twice among other trophies during his eight-year spell at the Spanish capital. He joined Madrid in 2013 from Malaga where he was seen as Spain’s future. He came through the Valencia academy before moving to Malaga in 2010.

(The above story first appeared on LatestLY on Mar 24, 2021 10:30 AM IST. For more news and updates on politics, world, sports, entertainment and lifestyle, log on to our website latestly.com).