Real Madrid skipper was left out of the squad for the weekend game against Celta Vigo, which Zinedine Zidane’s team won 3-1. Sergio Ramos completed the training session before the game but was eventually not included in the matchday squad and might miss the Liverpool game as well. 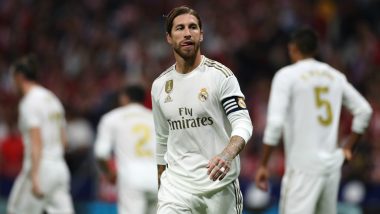 Sergio Ramos recently returned from an injury but according to reports in Spain, the 34-year-old is in doubt for the Liverpool clash in the Champions League after sustaining a fresh knock. The Real Madrid skipper came back from a lengthy spell on the sidelines against Elche a couple of weeks back but is once again likely to remain out of the first-team action for a while. Karim Benzema, Sergio Ramos, Luka Modric, Marco Asensio, Toni Kroos & Others React After Real Madrid Beats Atalanta.

Sergio Ramos, who is in the final few months of his contract with Real Madrid, returned back from an injury earlier this month but has failed to complete 90 minutes since. The 34-year-old started the game against Elche in the league and Atalanta in the Champions League but was taken off before the end as a precaution. Sergio Ramos Transfer News Update: 'No Advancement' in Real Madrid Skipper's Contract Renewal Talks.

However, the Real Madrid skipper was left out of the squad for the weekend game against Celta Vigo, which Zinedine Zidane’s team won 3-1. Sergio Ramos completed the training session before the game but was eventually not included in the matchday squad and according to Mundo Deportivo, the 34-year-old is likely to miss the Champions League cash against Liverpool as well.

Sergio Ramos is named in the Spain squad for the upcoming international break where they rake on Greece, Kosovo and Georgia in the World Cup Qualifiers. But according to the publication, the 34-year-old might not recover from his tibia issue in time to take fulfill national team duties and will be a doubt after the break as well.

Real Madrid boss Zinedine Zidane has claimed his side’s Champions League quarter-final tie against Liverpool will be a huge physical test of his side. ‘We know the difficulties of the game. At this level, all the teams are very good and very difficult. It will be a very demanding match too. Liverpool are physically going to demand a lot from us’

(The above story first appeared on LatestLY on Mar 22, 2021 06:26 PM IST. For more news and updates on politics, world, sports, entertainment and lifestyle, log on to our website latestly.com).