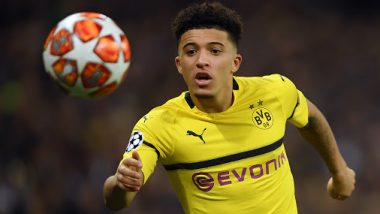 Manchester United are in advanced talk with Borussia Dortmund to sign Jadon Sancho in a deal that could rise to 120 million Euros – a record transfer fee for an English player. Reports in the England media have stated that the Red Devils are close to agreeing a principal deal for the former Manchester City younger, who moved to Germany in 2017 to secure first-team football. United have been tracking the young winger for quite some time now and have made Sancho their main priority signing this summer. Wolfsburg Defender Kevin Mbabu Tests Positive for COVID-19, Out of UEFA Europa League 2019-20.

Dortmund and Man United have been involved in negotiations over a possible deal but failed to come to an agreement with Dortmund refusing to be lower their €120m valuation for the England international. But talks finally seem to have intensified this week after the Bundesliga club agreed to accept the transfer money in two-three instalments. Neymar Transfer News: Signing Brazilian Star Unfeasible in These Trying Times, Says Barcelona President Josep Maria Bartomeu.

According to a report from the Guardian, Dortmund will accept a deal that will United pay the transfer fee in instalments over the next two or three seasons. The transfer fee will reportedly be €100m with an additional 20 million euros in performance-related add-ons.

Sancho scored 17 goals and assisted 16 others in 32 Bundesliga matches for Dortmund in the recently-concluded season helping the club finish second in the league. The 20-year-old has reportedly already agreed personal terms with United over a five-year deal that will seem him stay at Old Trafford until 2025. Both the Red Devils and Dortmund are keen to resolve the deal quickly so that Dortmund can find a likely replacement before the next season commences in September.

If United do manage to secure a deal for Sancho, it could be for the second consecutive season that they have broken the transfer record for an English player having signed Harry Maguire for 88 million Euros last summer. Ole Gunnar Solskjaer’s side finishing third in the Premier League and securing Champions League football, was key in Sancho agreeing to return to England after playing three years in Germany.

The 20-year-old, Under-17 World Cup winner with England, will compete with Marcus Rashford and Anthony Martial and young Mason Greenwood and Daniel James for three positions in United’s attacking line. In three seasons at Dortmund, Sancho has scored 34 goals in 99 appearances in all competitions.

(The above story first appeared on LatestLY on Aug 03, 2020 11:00 PM IST. For more news and updates on politics, world, sports, entertainment and lifestyle, log on to our website latestly.com).