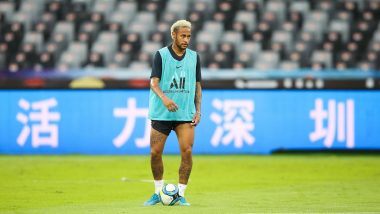 Barcelona, August 2: Barcelona President Josep Maria Bartomeu stated it is not feasible for the Catalan side to re-sign Brazilian star striker Neymar from Paris St-Germain in the current economic climate caused by the Covid-19 pandemic.

"We had been following (Miralem) Pjanic for a long time. He was always delighted with the possibility of coming to Barca and it wasn't a surprise signing. He will easily integrate himself as an important player," Bartomeu told Spanish newspaper Sport.

"Barca have spoken with Inter about Lautaro (Martinez), but the talks have stopped. The situation doesn't invite large investments." "Neymar? In this situation, it's unfeasible. Nor does PSG want to sell him."

On the current economic situation, he said: "The club lost 200 million euros between March and June. In the 2020/21 season we expected to post 1.1 billion euros, but we'll have 30 percent less. Neymar Transfer News Latest Update: PSG Not Expecting Barcelona to Come for Brazilian Star This Summer.

"If the situation of the pandemic doesn't improve, there will be no spectators, no museum, no stores open, and money will continue to be lost. It forces us to be very rigorous in management: we must review which investments are essential and which can wait.

"All the big European clubs are affected. Everyone works to adapt. And this isn't going to last a year, but three or four."

Bartomeu also said the current squad is the best although Barcelona failed to win the LaLiga title with arch-rivals Real Madrid being crowned champions this season.

"They are the best. They play very well, they train well, they try hard and they have ambition. The best thing is to combine experience with youth. They keep the ambition intact and the desire to win alive."

"The most beautiful thing in football is to combine the experienced players who have been winning for many years with those youngsters who come with the desire to win.

"Another batch of youngsters are coming: three players, including Matheus, and three who have risen from the B team. The arrival of seven players in a year, counting Pjanic, isn't bad.

"Araujo, Riqui Puig and Ansu Fati will be first team players. At the moment we haven't discussed any more, but there is still a long way to go. The pre-season remains, for example, and there will be many B team players to look at," he added.

(The above story first appeared on LatestLY on Aug 02, 2020 11:33 PM IST. For more news and updates on politics, world, sports, entertainment and lifestyle, log on to our website latestly.com).