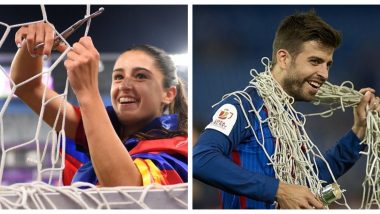 Long ago, Gerard Pique did the same and was seen celebrating the trophy win by wrapping the net around his body in the stadium. He has been following this ritual since 2011. He did it in 2011 after winning the Champions League against Manchester United.  In 2012 when Spain won the Euro Cup and then in the Champions League in 2017.  This time the pictures of Jana cutting the net were shared by many social media pages.

Check them  out below:

Needless to say that the Barcelona fans had something to cheer for. Alexia Puttelas, Aitana Bonmati and Caroline Graham Hansen were the ones to score goals for the team.

(The above story first appeared on LatestLY on May 17, 2021 11:59 AM IST. For more news and updates on politics, world, sports, entertainment and lifestyle, log on to our website latestly.com).