Lazio vs Juventus Live Streaming Online & Match Time in IST: How to Get Free Live Telecast of Serie A 2020-21 on TV & Football Score Updates in India?

Matthijs de Light and Giorgio Chiellini have taken part in first team training in build up to the game and it will be interesting to see whether Andrea Pirlo gives them a start. Juventus are likely to adop a 4-4-2 formation with Alvaro Morata and Cristiano Ronaldo as the strikers. 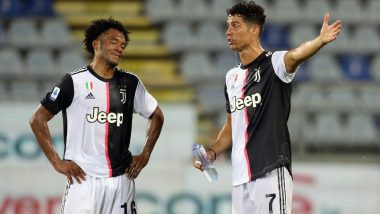 Juventus have a catching up to do in the Italian Serie A with AC Milan making a bright start to the season. The Bianconeri take on Lazio in an early kick-off hoping to get within a point from their arch rivals. Andrea Pirlo has not had the brightest of start to his Juventus reign but it is never easy for a new manager to get the players playing his way right from the onset. They are looking much more stable now than the start of the campaign and with some key players back in the squad, they can only go north in the points table. Opponents Lazio have been in the news for all the wrong reason with Serie A opening up an investigation against them for COVID 19 report violation. It will be interesting to see the kind of impact it has on their game. Lazio versus Juventus will be telecasted on Sony Channels at 05:00 pm IST. LAZ vs JUV Dream11 Prediction in Serie A 2020–21: Tips to Pick Best Team for Lazio vs Juventus Football Match.

Senad Lulic and Silvio Proto are injured and will not feature for Lazio although Luis Alberto tested negative for COVID 19 and could start from the bench. Sergej Milinkovic-Savic is the main man in the middle of the park for the hosts, one that makes them tick. Joaquin Correa and Vedat Muriqi will line up for the hosts in final third in 3-5-2 formation built to counter Juventus. Marco Parolo will ideally push up to join the attack but needs to do a lot of off the ball running should Juventus dominate possession.

Matthijs de Light and Giorgio Chiellini have taken part in first-team training in the build-up to the game and it will be interesting to see whether Andrea Pirlo gives them a start. Juventus are likely to adopt a 4-4-2 formation with Alvaro Morata and Cristiano Ronaldo as the strikers. Adrien Rabiot and Rodrigo Bentancur are the traditional central midfielders and their passing efficiency will have a bearing on the outcome of the game.

When is Lazio vs Juventus, Serie A 2020-21 Football Match? Know Date, Time and Venue

Where to Watch Live Telecast of Lazio vs Juventus, Serie A 2020-21 Football Match?

Sony Sports Network are the official broadcasters of Serie A 2020-21in India. So fans can tune into Sony Ten 2 and Sony Ten 2HD channels to catch the live-action of Lazio vs Juventus clash.

How to Get Free Live Streaming Online of Lazio vs Juventus, Serie A 2020-21 Football Match?

Lazio vs Juventus can be viewed online on OTT platform SonyLiv, the official streaming partner of Sony Sports Networks. So fans can tune into SonyLiv App or website to catch the live action of Serie A 2020-21matches. With Cristiano Ronaldo back and Alvaro Morata in fine form, Juventus should win this clash with a 1-2 scoreline.

(The above story first appeared on LatestLY on Nov 08, 2020 01:46 PM IST. For more news and updates on politics, world, sports, entertainment and lifestyle, log on to our website latestly.com).