The Paris Saint-Germain forward trained freely with the Argentina squad on Wednesday and Thursday, showing no sign of the injuries that kept him out of the French side's last two matches. 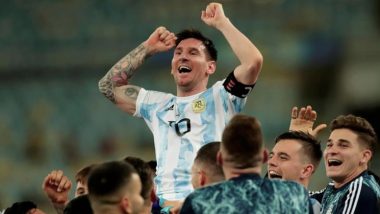 Buenos Aires, November 12: Lionel Messi will be available for Argentina's 2022 World Cup qualifiers against Uruguay and Brazil after recovering from hamstring and knee problems, Albiceleste manager Lionel Scaloni has said. The Paris Saint-Germain forward trained freely with the Argentina squad on Wednesday and Thursday, showing no sign of the injuries that kept him out of the French side's last two matches. The Albiceleste will meet Uruguay in Montevideo later on Friday and Brazil in the central-western Argentine city of San Juan next Tuesday (November 16).

"Messi is fine. He intensified his training a little more (on Wednesday and Thursday) and, in principle, he's available," Scaloni told reporters. "Leo wants to play and I want him to play. He played all the way through (this year's) Copa America and, for me, he is a source of pride. I'd love everyone to have the same desire to play that he does, even when they are not fully fit." Argentina are currently second in the 10-team South American qualifying group with seven wins and four draws from 11 matches, six points behind Brazil.  CONMEBOL FIFA World Cup 2022 Qualifiers Points Table: Brazil Continue To Lead, Argentina Remain In Second.

Meanwhile in Quito, a first-half goal from teenage defender Piero Hincapie gave Ecuador a 1-0 home win over Venezuela in their 2022 FIFA World Cup qualifier on Thursday evening. The 19-year-old Bayer Leverkusen centre-back latched onto a curling Gonzalo Plata free-kick with a diving header that looped into the back of the net after ricocheting off goalkeeper Rafael Romo.  Lionel Messi Reveals That He Intends To Return to Barcelona at Some Stage in the Future.

The result means Ecuador now have 20 points from 13 qualifiers as they edge closer to securing a berth in their first World Cup since 2014, Xinhua reports. Venezuela remain last in the 10-nation South American zone standings with seven points from 13 games. The top four teams will automatically qualify for next year's World Cup in Qatar while the fifth-ranked side will advance to an intercontinental playoff.

(The above story first appeared on LatestLY on Nov 12, 2021 03:38 PM IST. For more news and updates on politics, world, sports, entertainment and lifestyle, log on to our website latestly.com).