With Jurgen Klopp’s squad chasing Manchester City’s 100 point record, Aston Villa know they are up against it. The Villans are currently 18th in the league with 27 points from 32 games. Their form heading into the contest is disastrous which complicates matters for them. 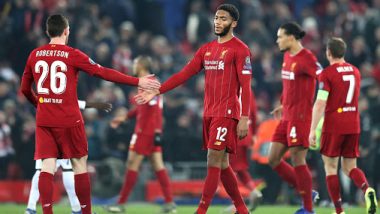 Liverpool vs Aston Villa, Premier League 2019-20 Free Live Streaming Online: Aston Villa travel to Merseyside to take on Premier League champions Liverpool in what is a critical game for the relegation-threatened club. The Reds were crushed 4-0 by Manchester City in their first game as the Premier League champions and will be eager to restore parity. With Jurgen Klopp’s squad chasing Manchester City’s 100 point record, Aston Villa know they are up against it. The Villans are currently 18th in the league with 27 points from 32 games. Their form heading into the contest is disastrous which complicates matters for them. Liverpool versus Aston Villa will be telecasted on Star Sports network and streamed on Hotstar from 9:00 pm IST. Manchester City Secure Emphatic 4-0 Win over Liverpool.

Liverpool players looked off the pace against Manchester City which would have annoyed manager Jorgen Klopp who is a hard taskmaster. Mo Salah, Sadio Mane and Roberto Firmino will start once again with the likes of Divock Origi on the bench. Joel Matip continues to miss games for the Reds owing to a foot injury which means English defender Joe Gomez should partner Virgil Van Dijk at the heart of the defence. Fabinho and skipper Jordan Henderson are key to Liverpool’s high pressing game and should stifle Aston Villa in the middle of the park. Amul Celebrates Liverpool’s First-Ever Premier League Title With Latest Topical Ad.

Matt Targett has damaged his hamstring and will be replaced by Frederic Guilbert for Aston Villa. Tom Heaton and Bjorn Engels are out for the remainder of the season dealing the visitors a huge blow. Jack Grealish has been a standout performer for the Villans throughout the campaign but football being a team sport, the England midfielder has often been left out with too much to do with too little support from a fellow player. The likes of Anwar El Ghazi and John McGinn need to stand up and shoulder the responsibility in order to support Grealish.

Where to Get Live Telecast of Liverpool vs Aston Villa, Premier League 2019-20 Football Match?

How to Get Free Live Streaming of Liverpool vs Aston Villa, Premier League 2019-20 Football Match?

Disney+ Hotstar, the official partner of Star Sports will be streaming the game live on OTT platforms. Fans can tune in to Disney+ Hotstar app or website to get live streaming of Liverpool vs Aston Villa in Premier League. Aston Villa will struggle from the onset against Liverpool with their free-flowing football of the hosts getting the better of them.

(The above story first appeared on LatestLY on Jul 05, 2020 01:09 PM IST. For more news and updates on politics, world, sports, entertainment and lifestyle, log on to our website latestly.com).