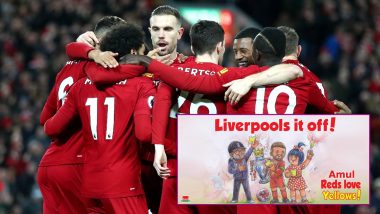 In the post shared by Amul, Liverpool manager Jurgen Klopp and caption Jordan Henderson could be seen standing with the Premier League trophy. However, the Reds have not yet got their hands on the elusive cup as they will have to wait until their final home game of the season to lift the first EPL title in their history. Luis Suarez Says Jordan Henderson One of the Best Captains in Liverpool’s History.

‘Football club wins Premier League title after 30 year wait!’ Amul captioned their post as they applauded Liverpool for this achievement.

Liverpool will travel to Manchester City on Thursday for their next Premier League clash and will receive a guard of honour from the departing champions as confirmed by City boss Pep Guardiola. ‘Always we receive Liverpool when they come to our house in an incredible way. They cannot complain and of course, we are going to do it because they deserve it.’ Said the 49-year-old.

With the title already secured, Liverpool will now have their eyes set on Manchester City’s record of 100 points in a single Premier League season. Jurgen Klopp’s men must accumulate 15 of the possible 21 points to surpass the record set by Pep Guardiola’s team in the 2017-28 season.

(The above story first appeared on LatestLY on Jun 28, 2020 11:11 AM IST. For more news and updates on politics, world, sports, entertainment and lifestyle, log on to our website latestly.com).