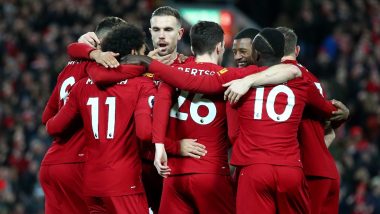 EPL Live Streaming Online in India: Liverpool will begin their defence of the Premier League title against Leeds United at home with the Reds in the news recently for their lack of transfer activity. Jurgen Klopp and his men know the likes of Manchester City, Manchester United and Chelsea will come in hard at them this term and the pressure will be many fold higher compared to their title winning campaign. Opponents Leeds United make a foray into English top flight football after ages and their fans cannot keep calm at the moment. Although they start with a difficult away trip to the Anfield, the squad is buzzing to play some quality football. LIV vs LU Dream11 Prediction in Premier League 2020–21: Tips to Pick Best Team for Liverpool vs Leeds United Football Match.

Liverpool captain Jordan Henderson is not fully fit and will undergo a late fitness test to determine his availability for the game. If he fails to make the team, Naby Keita will start in his place in the Liverpool midfield where he will be joined by Fabinho and Georginio Wijnaldum. Alex Oxlade-Chamberlain has a knee problem and misses out on the opening game. The front three of Mo Salah, Sadio Mane and Roberto Firmino all start for the hosts with the trio considered the best attacking unit in the league.

New signings Robin Koch and Rodrigo Moreno have not trained much and this will deny them a start against Liverpool for Leeds. Kalvin Phillips is the most important player in the team will start in central midfield with majority of their game play being orchestrated by him. Patrick Bamford should start as the lone striker for the visitors with Helder Costa and Jack Harrison out wide. Liverpool Defender Trent Alexander-Arnold Says ‘Need to Keep Mentality That Helped Us Win English Premier League’.

Liverpool vs Leeds United match in Premier League 2019-20 will take place on September 12, 2020 (Saturday). The match will be played at the Anfield and will begin at 10:00 pm IST (Indian Standard Time).

Where to Get Live Telecast of Liverpool vs Leeds United, Premier League 2020-21 Football Match?

How to Get Free Live Streaming of Liverpool vs Leeds United, Premier League 2020-21 Football Match?

Premier League 2020-21 can be viewed on Disney+ Hotstar, the official OTT platform of Star Sports. So fans can either download the Disney+ Hotstar app or log onto the website, to watch the live streaming of Liverpool vs Leeds United match. Liverpool at Anfield are almost impossible to beat and though Leeds United will create a chance or two, the hosts are too good not secure all three points.

(The above story first appeared on LatestLY on Sep 12, 2020 06:31 PM IST. For more news and updates on politics, world, sports, entertainment and lifestyle, log on to our website latestly.com).