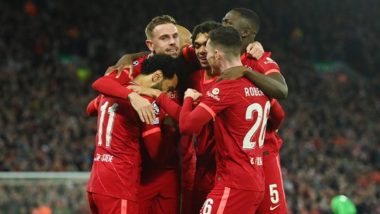 Liverpool, in pursuit of an unprecedented quadruple, need a miracle on the last day of the Premier League season. The Reds play host to Wolves this evening but their supporters will have one eye on the Manchester City Aston Villa match with them needing Pep Guardiola’s men to drop points. With two title already in their kitty, Jurgen Klopp has assembled a squad that fights till the very end and believes in their abilities. Although their fate is not in their hands when it comes to the EPL, they have to strive to beat a quality side like Wolves. Paul Pogba Worried About Fan Backlash During Manchester United vs Crystal Palace Clash in Premier League.

Virgil Van Dijk, Mohamed Salah, Fabinho and Joe Gomez are all not fully fit and will struggle to have any involvement against Wolves. Sadio Mane, Diogo Jota and Luis Diaz make the front three for the hosts with Divock Origi, playing his final game for the club, an option from the bench. Skipper Jordan Henderson, Naby Keita and Thiago Alcantara will feature in midfield. Joel Matip is a certain starter in the back four while his centre-back partner is yet unknown.

Joao Moutinho and Ruben Neves, the core member of Wolves constant top performance in the league, will step out one final time in a Wolves shirt against Liverpool. Raul Jimenez, Pedro Neto and Chiquinho start as the forwards in a defensive 3-4-3 formation which is solid at the back. Conor Coady and Willy Boly have played several games together in the backline and know how to battle hard against top sides.

Where to Get Live Telecast of Liverpool vs Wolves, Premier League 2021-22 Football Match?

How to Get Free Live Streaming of Southampton vs Liverpool, Premier League 2021-22 Football Match?

The game will also be available online for live streaming. As Star Network is the official broadcaster for Premier League in India, fans can watch the live streaming of the Southampton vs Liverpool on Disney+Hotstar. Liverpool should comfortably beat Wolves in the match but the Premier League title race has certainly slipped from their hands. Next up for them is the all important Champions League final against Real Madrid.

(The above story first appeared on LatestLY on May 22, 2022 02:04 PM IST. For more news and updates on politics, world, sports, entertainment and lifestyle, log on to our website latestly.com).