Paul Pogba has reservations about playing for the Red Devils against Palace on Sunday. The midfielder has been under immense pressure in recent times as fans have expressed their displeasure with him. 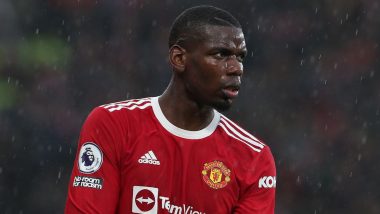 Paul Pogba is fit again after missing the past few games due to injury. However, the French international is worried about playing for Manchester United in their final Premier League fixture against Crysta Palace. The midfielder has not produced his best while playing for the Red Devils and is concerned about the backlash in what could be his final game for the Premier League outfit. Paul Pogba Reportedly Turned Down Manchester City’s Offer To Avoid Backlash From United Supporters.

The Frenchman's contract with Manchester United comes to an end in the summer. The midfielder is yet to agree to a new deal and is tipped to move away. Juventus and Paris Saint Germain are the two favourites to land the France international but the 29-year-old is yet to make a decision about his future.

Manchester United are yet to see the best f Paul Pogba since his return to the club six years ago. The club have failed to get anywhere near to the Premier League title in that period which has seen the Frenchman come under immense scrutiny.

According to a report from ESPN, Paul Pogba has reservations about playing for the Red Devils against Palace on Sunday. The midfielder has been under immense pressure in recent times as fans have expressed their displeasure with him.

The Frenchman was recently booed by the fans at Old Trafford during Manchester United's game against Norwich, He has also been on the receiving end of heckling in the past by a number of the club's supporters.

Amidst this, the 29-year-old is worried about a backlash from fans on what could be his final matchday with the club as he prepares for an exit. Staying at United is also an option for the midfielder but it looks highly unlikely after his second spell at the club has failed to live up to expectations.

(The above story first appeared on LatestLY on May 20, 2022 06:15 PM IST. For more news and updates on politics, world, sports, entertainment and lifestyle, log on to our website latestly.com).