A 2-1 loss against the same opponent had put Manchester United’s Champions League journey in jeopardy on matchday 1 but some individual brilliance from Cristiano Ronaldo and Bruno Fernandes has seen them through. Opponent Young Boys have a chance to make it to Europe should they win. 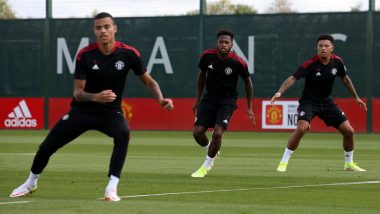 Manchester United are involved in a dead rubber game against Swiss side BSC Young Boys in the UEFA Champions League which gives manager Ralf Rangnick an opportunity to provide game time to his fringe players. The Red Devils are assured of a top finish in Group F and their priorities clearly will be on improving their domestic position in the next few months. A 2-1 loss against the same opponent had put Manchester United’s Champions League journey in jeopardy on matchday 1 but some individual brilliance from Cristiano Ronaldo and Bruno Fernandes has seen them through. Opponent Young Boys have a chance to make it to Europe should they win and the other result goes their way so they have all to play for at Old Trafford. Lionel Messi Overtakes Pele and Closes on Cristiano Ronaldo’s Goal-Scoring Record With Brace in Champions League.

Donny Van de Beek, Nemanja Matic and Dean Henderson will all start for Manchester United as confirmed by Ralf Rangnick in the pre-game interview. Mason Greenwood and Anthony Elanga are expected to lead the attack with Jesse Lingard behind them. Eric Bailly is set to partner Victor Lindelof in the backline as Harry Maguire gets a breather. Luke Shaw and Aaron Wan-Bissaka have been missing in action for few games now and the duo will look to capitalise on this opportunity.

David von Ballmoos, Christian Fassnacht, Felix Mambibi, Jean-Pierre Nsame, Joel Monteiro and Esteban Petignat are all missing for Young Boys due to injuries. Nicolas Moumi Ngamaleu troubled United the last times these two met and he will have a huge role to play on the wings again. Jordan Siebatcheu is the leading scorer for the Swiss team and should play as the no 9 in a 4-3-3.

Manchester United vs Young Boys clash in UEFA Champions League 2021-22 will be played at the Old Trafford Stadium, on December 9, 2021 (Thursday). The game has a scheduled time of 01:30 am IST (Indian Standard Time).

Sony Pictures Network are the official broadcasters of UEFA Champions League 2021-22 in India and will telecast the games live on its channels. Fans can tune into Sony Ten HD/SD channels to watch the live telecast of Manchester United vs Young Boys on TV.

Sony Pictures Network’s official OTT platform Sony Liv will be streaming the game live for its fans in India. You can tune into the Sony Liv app or website to watch Manchester United vs Young Boys, UEFA Champions League 2021-22 live streaming online. JioTV would also provide live streaming for this match.

Manchester United may file a second-string side for the match but they have enough quality about them to win the tie.

(The above story first appeared on LatestLY on Dec 08, 2021 02:52 PM IST. For more news and updates on politics, world, sports, entertainment and lifestyle, log on to our website latestly.com).