The 25-year old recently helped Lille win the French league title with 21 clean sheets. Maignan would be replacing Gianluigi Donnarumma, whose contract is expiring next month and is set to leave AC Milan after six seasons. 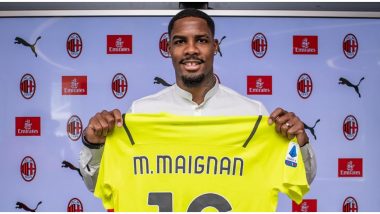 Italian giants AC Milan on Thursday signed goalkeeper Mike Maignan from French champions Lille. The 25-year old recently helped Lille clinch the French league title with 21 clean sheets, winning the golden glove in the process. Maignan would be a replacement for Gianluigi Donnarumma whose contract is expiring next month and is set to leave AC Milan after six seasons, after it was confirmed by club director and legend Paulo Maldini. Donnarumma had made his Milan debut at just 16 years of age and is leaving on a free transfer after having made more than 250 first team appearances. AC Milan Make Champions League Return After Eight Years With 2–0 Win Over Atalanta

AC Milan would be participating in the Champions League next season--eight years after having last featured in Europe's top competition. Maignan's transfer fee from Lille to Milan is reported to be around €15 million.

Maignan has just one appearance for France and has been a crucial factor in Lille's ascension to the Ligue 1 trophy this season after a decade. He is also added to the France squad for this year's European championships.

(The above story first appeared on LatestLY on May 28, 2021 04:35 PM IST. For more news and updates on politics, world, sports, entertainment and lifestyle, log on to our website latestly.com).